The company I work for is based in Atlanta and every year we have a department meeting at the HQ and get a chance to tour something in the city. This year I decided to buy an extra ticket for Alene and bring her along. We arrived on Saturday and spent Sat/Sun touring around the city visiting various landmarks and doing a bit of hiking. The first place we hit up was the Coke Factory (Coca Cola was started in Atlanta). I'm going to just leave that link up on my personal blog as it's not really an "outdoors" thing.

After the Coke Factory we ran over to visit Stone Mountain which is both a landmark and a state park/amusement park. This an impressive piece of granite rock that sticks up high out of the ground. Most of Atlanta is flat or a little hilly. There were two major high points in the area: Stone Mountain and Kennessaw Mountain, both of which were used during the Civil War as lookout points. The hike up to the top of Stone Mountain is about 1.5 miles I believe and not very hard. There is also an option to take a Gondola to the top for those impaired or the just plain lazy.

I remember sticking a piece of gum on this pole last time I hiked it, so I found it and was looking to re-chew the sucker. 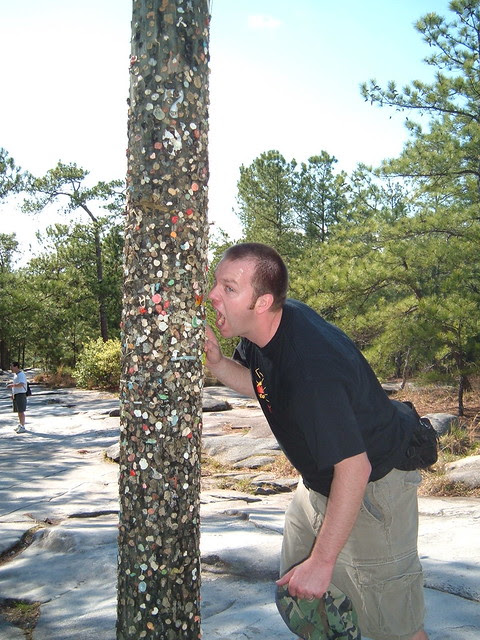 Tyler on top of Stone Mountain 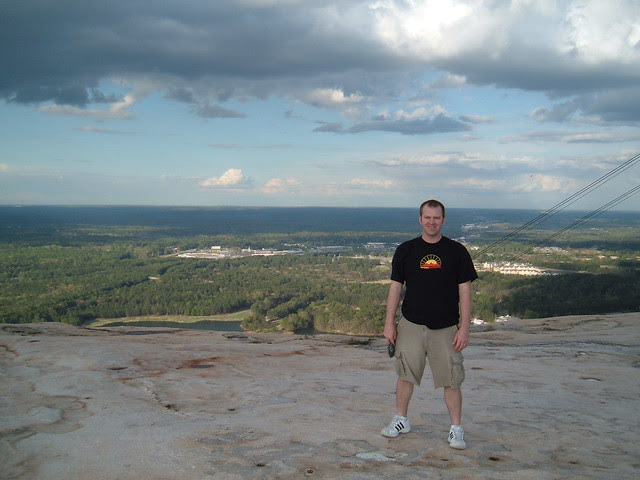 Alene on top of Stone Mountain (Atlanta in the background) 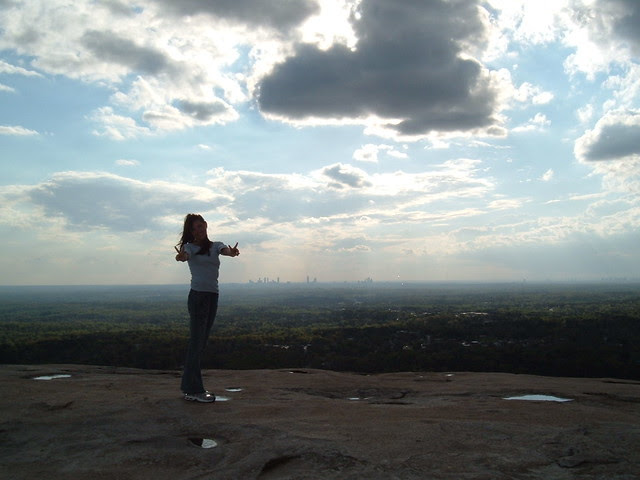 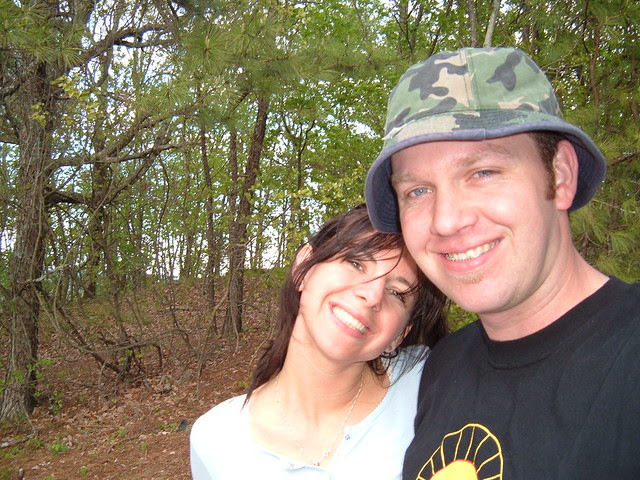 This was a cute little bridge that was built around the 1880's and was moved to the park around 1920. The history said that it cost $1400 to build, but $19000 to move. It was built with all wood, no metal. It has wood pegs holding all the boards together. 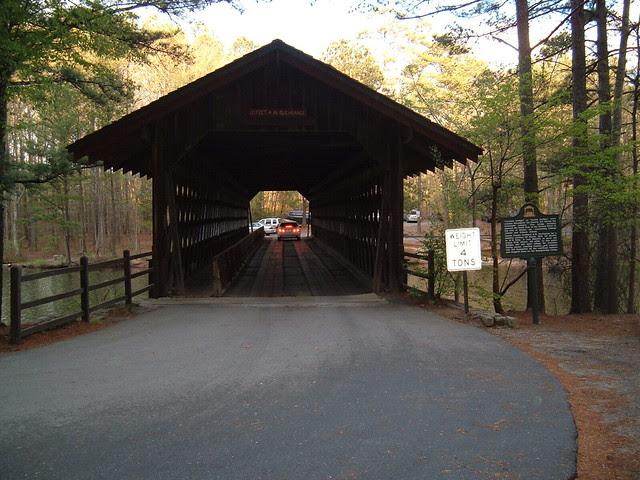 This is the famous carving of General Lee, General Stonewall Jackson, and Confederate President Jefferson Davis. The 2nd part of the KKK was formed at the top of this mountain. Pretty freaky. It took 20 years to do this carving. 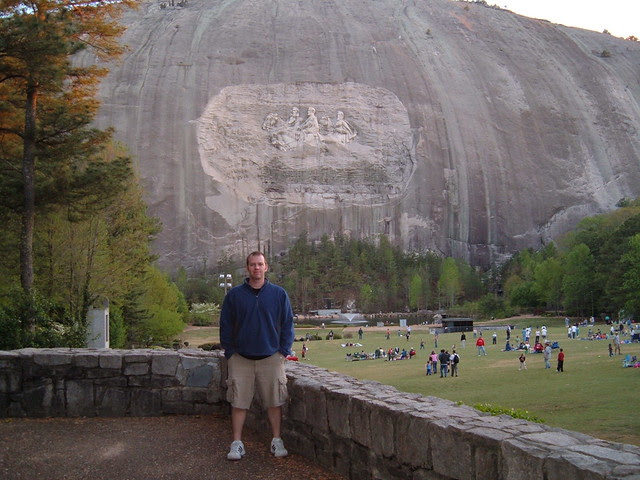 Kennesaw Mountain is a fun place to visit as well. The area around it was littered with Civil War battlefields (many still kept clear and preserved). I believe a lot of the re-enactments take place out here still. Kennessaw Mountain itself has a paved road that will actually take you to the top, or you can hike some of the many trails that wind all around the mountain area. Many locals were here after their workday jogging, which I can imagine is a nice get away from working in the city. This mountain was used as a look-out as well as a defense. The confederates were crushed here as well as out-manuvered as the Union simply fought for a bit, then went right around them. 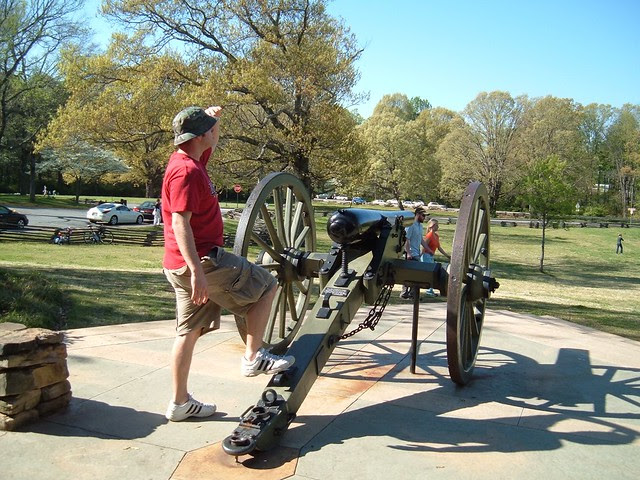 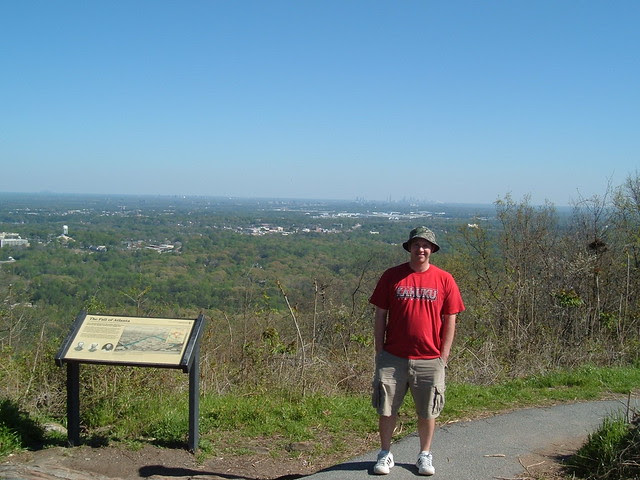 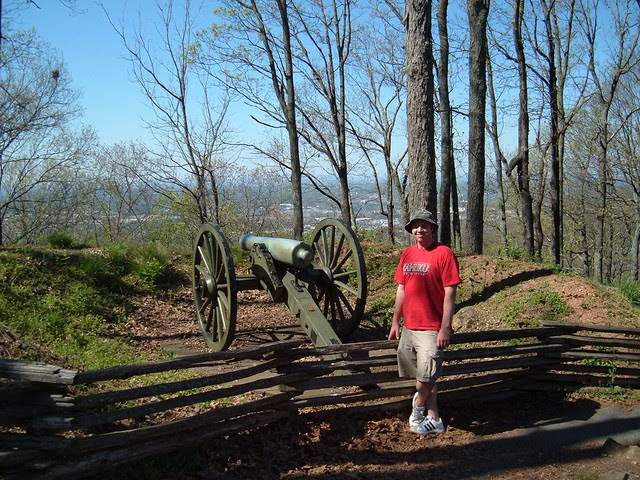 Alene returned home later that evening to get ready for her work week.

The next day I met up bright and early with my co-workers to do some Bass fishing. We went out to Lake Lanier to catch some stripers (Striped Bass). We only went out for 4 hours, but it was funner than I expected it to be. I don't fish (not regularly) and I am looking forward to learning the art/skill of fly fishing in the future, but I've never thought much about wanting to go out on a boat and just sit and wait. I'd rather work it up and down a river like the fly fishermen do.

Here are some pictures:

The sunrise on our ride out to our fishing spot 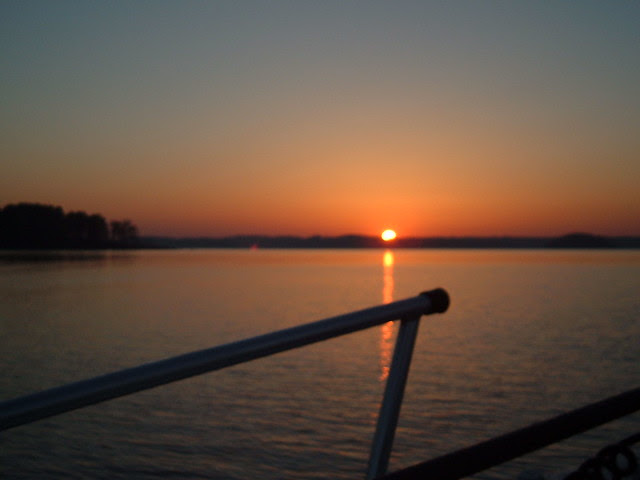 Our guide (shane), who also owned the guide service company. He was pretty much leading all his boats as to where to go, etc. He was a great guide and it was so impressive to see him know this lake so well. 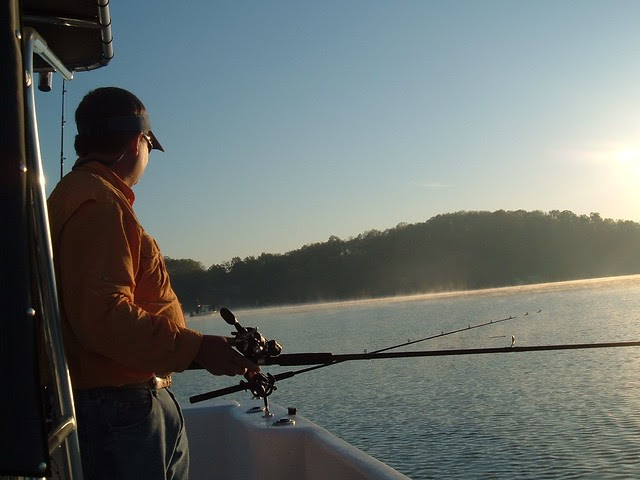 The first fish I caught, which was a spotted bass. We weren't looking for those though and it was only 6 lbs so we tossed it back. 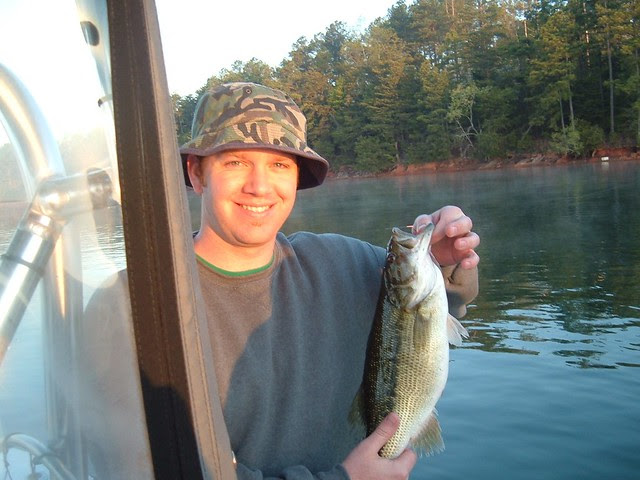 One of the stripers I caught. Biggest fish I've ever caught/held. 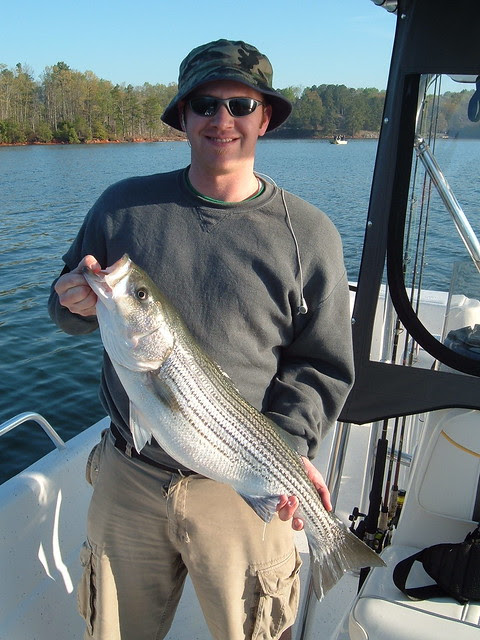 Kissing one of my beautiful babies. 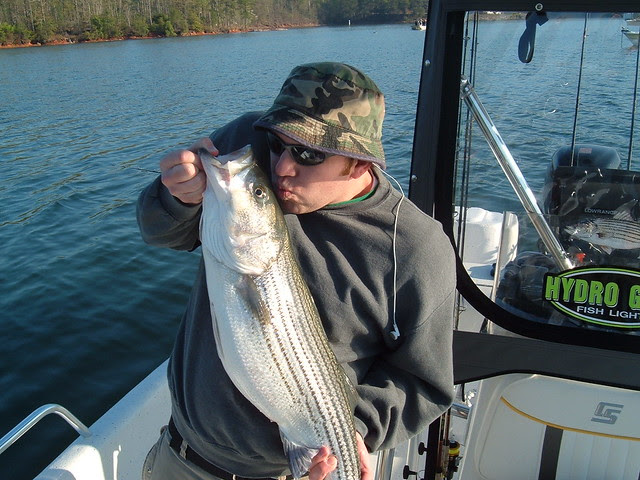 One of my co-workers (Todd) with a tasty bass. 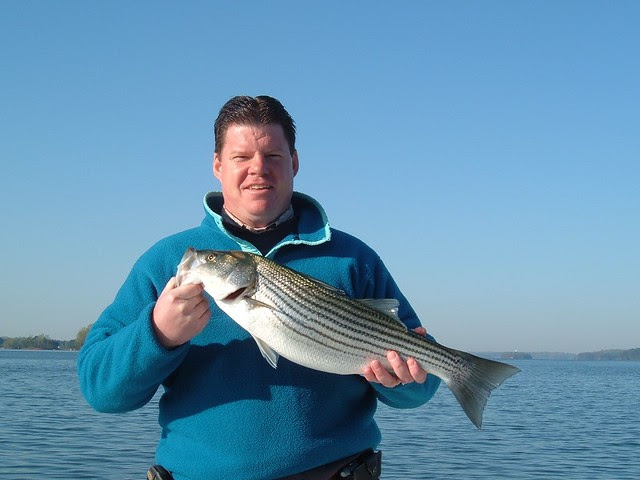 A striper another co-worker (Al) caught. This one was HUGE (about 23 lbs) 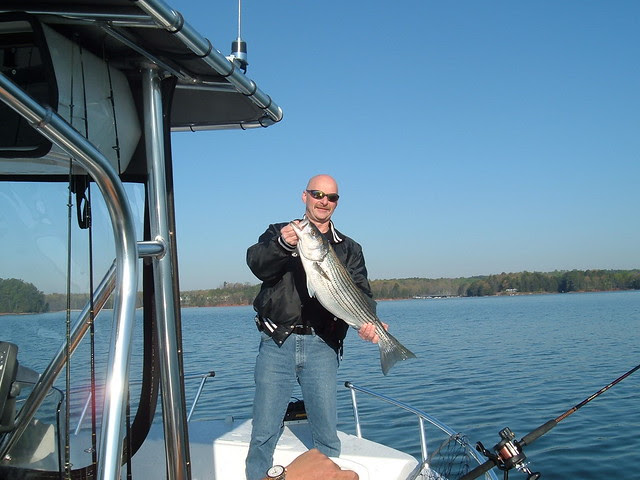 Here are the losers (my other co-workers) boat, from a distance. They drank more beer than fish caught :-). 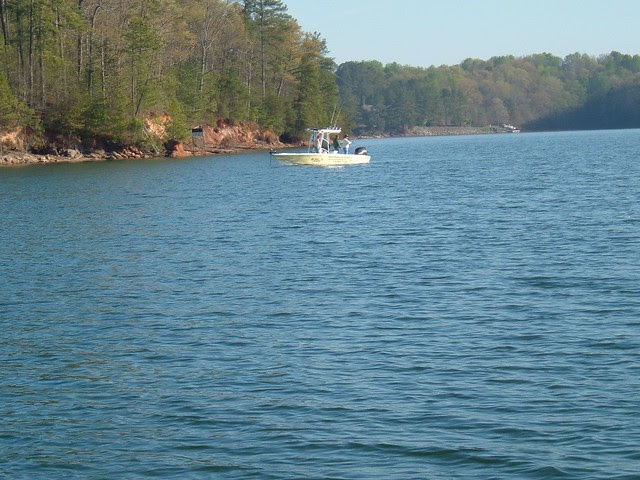 After getting back to my hotel from a day of fishing and meetings at work, there was some room service consisting of berries and whipped cream, some chocolate cake, and milk. It kind of worried me because I had no idea how it had gotten there. I figured someone put it in there on accident, so I didn't touch it thinking I would be charged for it. It had not occured to me that it was for my birthday.

I called Alene a bit later and talked to her about the fishing day, etc. and I mentioned the room service tray that was in my room and how I was wondering how it got there and why it was in there. She then said, "maybe because it's your birthday". It hit me then that SHE did it for me. I was so stoked because everything on the tray looked delicious, AND for the fact that Alene is so thoughtful. Here is a picture of how it was set up in the room. 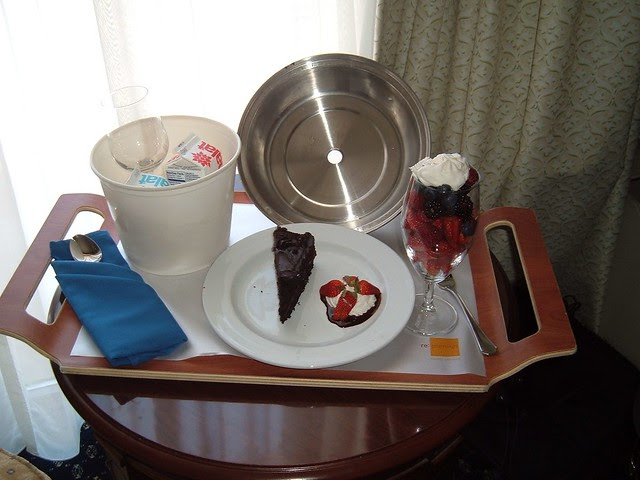 Atlanta was an awesome place to visit, but don't know if I could live here because of the lack of mountains to climb, although I know the Appalachians are only a couple hours north.
Posted by Unknown at 1:08 PM No comments:

I'm still here, but Alene is gone now, so I have to head over to work and mingle with everyone from my department for the next 2 days (tour the new aquarium and go bass fishing on Tuesday).

We went to the coke museum (it wasn't THAT bad). Like some said, yeah, it was like a big coke commercial, but being I like anything interesting and historical, I consider Coke a historical thing. It was funny how I kept thinking about how they kept saying "our secret formula" throughout their advertising everywhere. My immediate thoughts kept turning to "cocain". Once they got rid of the cocain (for legal reasons) what flavor did they use after that to keep the formula "secret and original tasting"?

We went to Stone Mountain, hiked it, drove around, and saw the lazer show later that night (actually, just saw the first show, then left; you've seen a lazer show, you've seen them all. Plus we were tired).

On Sunday we went and hiked Kennesaw Mountain, which was fun. Alene and I did a lot of talking and situational conversation. Stuff like "if you had a kid you were teaching in your class who just needed to pass a final to walk and graduate and get on with his life and you knew he was a good kid, but he just didn't care about the subject, would you give him the answer sheet for his final so he could pass it???" This situation happened to my younger brother his Sr. year. He was a good, quiet kid that just went with the flow. The teacher knew me from previous years and was a pretty older teacher, but for whatever reason he felt "inspired" or something to let my brother pass the final by giving him the answer sheet (my brother had failed it the first time and he allowed him to re-take it in private, with the answer sheet).

Anyway, l dropped my wife off and went to the store to buy the Gorillaz CD. HOLY CRAP THAT IS A GREAT ALBUM!! The song "Dirty Harry" has a guest rapper on it named "Booty Brown" who was a part of the group the Pharcyde, which is a group from back in "my day" that I used to worship. It was cool to hear him rap on this album. This album is not rap, it's not rock, it's not dance. It's just a GREAT album that people of all genres would like. It's done very tastefully with a lot of cello's and violin's too. It's great.

I ended my evening watching a GREAT movie I had rented before we came out here, to watch when I had time. It's PT Anderson's first movie (PT Anderson did Boogie Nights, Magnolia, and Punch Drunk Love). It was called Hard Eight and it was suprizingly touching (had me trying to "scratch something out of my eye" at one point). I recommend it to all that enjoy PT Anderson-type movies. Great script, excellent cinematography, GREAT acting, and an interesting topic of course.

One thing that is weird about being away on "vacation" or to work is that I become very un-plugged from what is going on in the world. For all I know we could be invading a country, or Mexico could be washed away from some huge hurricane. Seriously though, I feel very "un plugged" from the world right now, even though I'm in one of the larger cities in America.
Posted by Unknown at 1:09 PM No comments: