Several months ago I saw on the internet a picture of something labeled the "cosmic ashtray," also called the Escavolcano.  I was intrigued by the formation and learning it was somewhere out on the Grand Staircase made it all the better, I'm in love with that place, ever since doing a two-month archaeology dig there when I was an undergrad.  I looked into it a little, but having an infant at the time, was trying not to tease myself about taking a trip.

Fast forward to October and my sister and I are trying to plan our annual no-children getaway.  As mentioned, this happens usually just once a year (something we desperately need to change but is so so hard) so we were looking for something intense.  We are both excellent hikers and very experienced in canyons and rugged trails with obstacles.  We wanted a challenge but time is never on our side, we could really only afford a day-hike.  When I started reading about Red Breaks I felt like I had struck gold.  I had done plenty of the others down Hole-in-the-Rock Road, but this slot promised to be one of the most scenic in the area, and a continuous slot for much longer than most.  Not only could we hike through the slot, then we could make our way over to see the Escavolcano mentioned above.

Sunset from Boulder mountain on the drive down

A buck in the trees

I rounded up a few friends and we planned to meet at the trailhead early on the morning of our hike.  When they arrived I noticed that one of them had brought his parents-in-law.  I have no desire to discriminate, but I did send these guys the route description beforehand and I thought it was clear that some climbing would be involved and the hike could be long and difficult.  However, I wasn't going to tell them they couldn't come and so I told myself that they must be prepared.

It quickly became apparent that they weren't however.  My route description mentioned 9 obstacles, but they started counting rocks that merely required putting a knee up to climb on and over.  I felt frustrated, but this was early in the day.  My friends were a bit apologetic, but figured there wasn't much that could be done besides helping the older couple out. And so we went along.  We all marveled at the narrowness of the slot and beauty of the canyon walls.  But most awesome was the feeling that we were someplace most people never venture, doing something not technical, but physically demanding nonetheless.  Climbing over rocks, stemming canyon walls, this is the kind of stuff I live for. 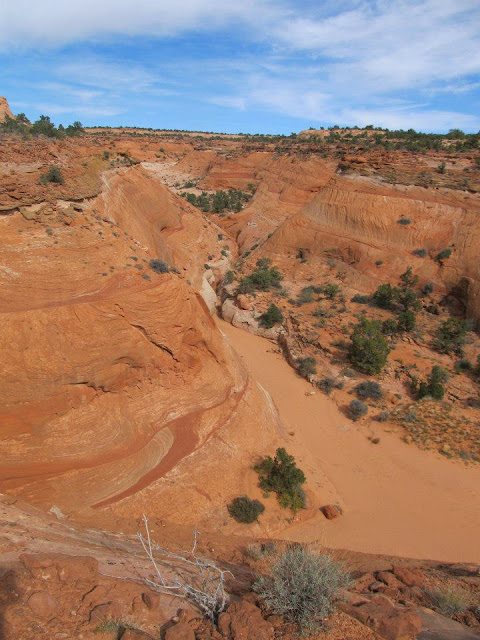 The dryfall at the entrance to the Big West Fork

our party in the Big West Fork

As we met more challenges, my friend Paul had to break out some rope and my webbing to help his in-laws.  Paul is a super-buff guy so I think they really were relying on him when they decided to come along.  He was able to get them over huge obstacles and the tightest of squeezes.  And he saved April and I from what presented itself as the worst obstacle of all--a tarantula in the narrow canyon!  He actually picked it up with his bare hands and then held it in his hat while on top of a rock so we could walk under and leave it far behind us.

these kinds of obstacles were not mentioned!

so beautiful it warms my heart!

the floor here was about an inch wide

a bit of a corkscrew

The canyon started heading up and up and up and tighter and tighter and tighter.  One of our older companions kept asking if we should turn around, and if I was really sure that this canyon would open up.  I felt a bit angry at this, I felt like they didn't trust me, and like they shouldn't have come because they were making it so much more difficult than it had to be.  Part of me thought it wasn't fair, this was my one trip for myself, I didn't want to be held back.  And yet, I kind of was impressed that as a group we were getting a couple of nearly 60-year-olds to see one of the greatest slot canyons I've ever seen, and I just have to give them some credit for even having the desire to come.  I know I'll still have that desire always, and I hope I stay in good enough shape to make it possible. 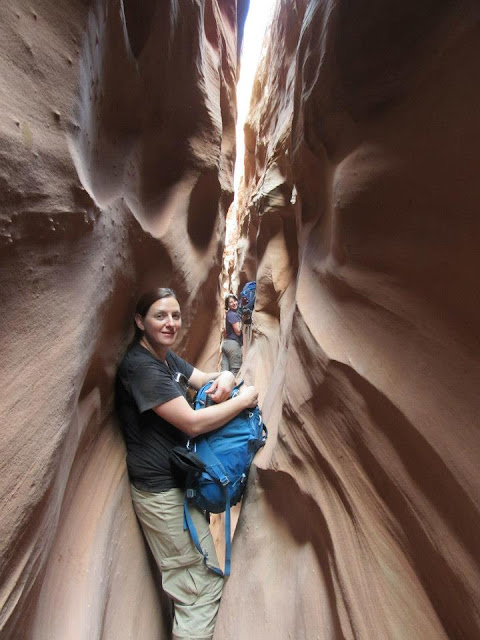 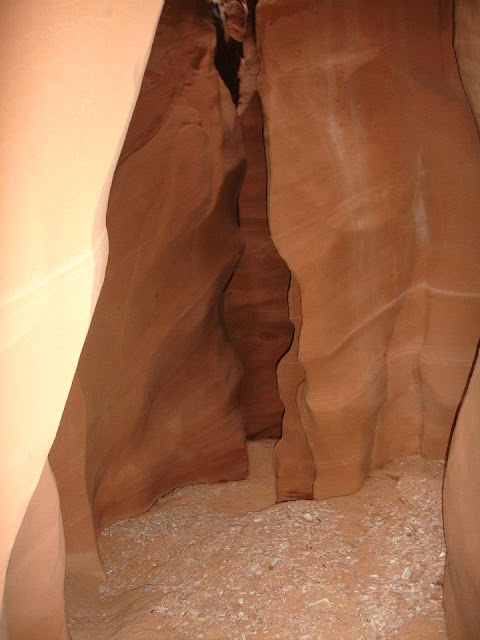 When we came out of the slot and checked the time we knew we'd be racing to get back before dark.  We quickly nixed the plan to see the Escavolcano, but figured we had to head that direction in any case since we couldn't go down the Main fork, and not knowing much about the Northeast fork.  At this point I think I began to get really irritated with a particular member of the party.  I get along with most everyone quite well and it made me mad at myself to feel this way, but I really didn't know how to handle it.  I felt like he just kept questioning me about the quickest way back and I really didn't know, which in turn made me feel stupid, irresponsible, and frustrated, and then more angry at him I guess.  I was following my GPS to find the dirt road we would hike back on to the trailhead.  But although I entered the waypoints and route myself, maps don't translate well to me when I look at what is in front of me and it my inexperience with GPS made me feel unsure of myself.  Sometimes it would completely flip around and point me the opposite direction which I knew wasn't right.  I felt pressured, like my friends were upset, and we were all really tired. 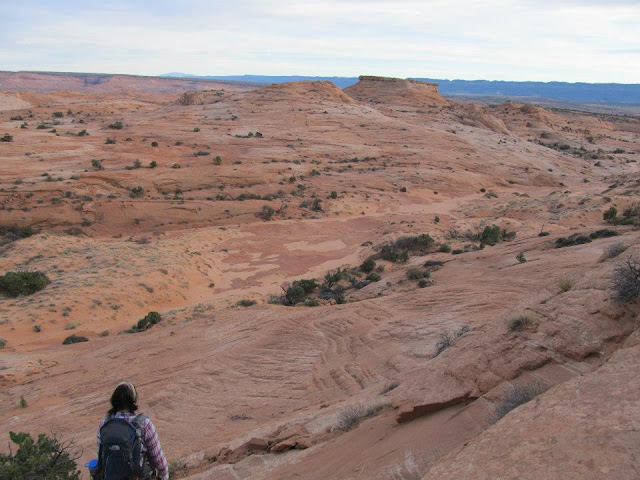 We made our way over three major drainages, each time the one hiker asking me if it wouldn't be easier to just hike down that.  Finally April could make out the sandy track in the distance and shortly after we saw some four-wheelers zipping by on it.  I honestly felt saved.  I hadn't screwed everyone over.  I knew we were probably very close to the Escavolcano, but we had no time to spare.

As soon as we hit the road it started getting dark.  We were treated to another beautiful sunset.  We jogged back to the trailhead despite being tired so we could grab the car and pick up our friends who were completely beat.  My friend Paul did the same and he ended up going back to get his in-laws sending my sister and I on our way.  But they weren't far behind and driving out the Hole-in-the-Rock Road we caught up to each other and all expressed what an awesome hike it had been.

Afterwards I noticed that my shoes broke open because of all the scraping against the canyon walls. I like the orange stain though.  I got nailed in the nose with a full waterbottle while passing my pack up once, it was tender a scraped for a week.  Also my zip-off pants broke so that one leg bottom wouldn't stay zipped on.  That was mostly just annoying.  It took us about 9 hours to do what we did, but I think a lot of time was spent trying to help the older hikers.  Usually April and I were over the obstacles in moments and then passing packs and so forth.  I can't wait to do this hike again sometime.  It was the perfect intense day-hike I was looking for and it would be awesome to do with my husband too sometime since he was on daddy-duty this time around.