This is a fun little hike just above Red Butte Gardens. Alene and I did this on Sunday afternoon. We were really itching to get out and do something and it seemed perfect.

We started off up a little canyon just south of Red butte Garden. As you make your way up the low scrub forested path, the canyon loops around to the North. Eventually the trail comes to a "T" junction we ended up taking the wrong trail (we went right), which took us to the top of a ridge above our destination (the living room). It was still nice though because we were able to see what was on the other side of the mountain (Red Butte reservoir) and a nice view of the valley.

Once we realized we went the wrong way, we hiked back down and took the correct route over to the Living Room.

The Living Room is basically a bunch of rock slabs that someone brought together and made a bunch of seats out of. As you sit there, you have an amazing scenic view of the valley. It would be a great place to watch the sun set.

Here are some pictures from our hike:

Alene and her beautiful pregnant belly, hiking up the canyon 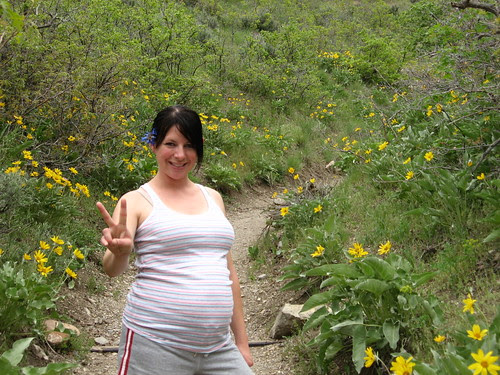 Salt lake valley from the ridge above the Living Room 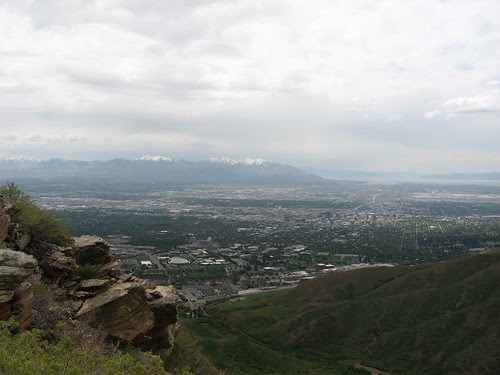 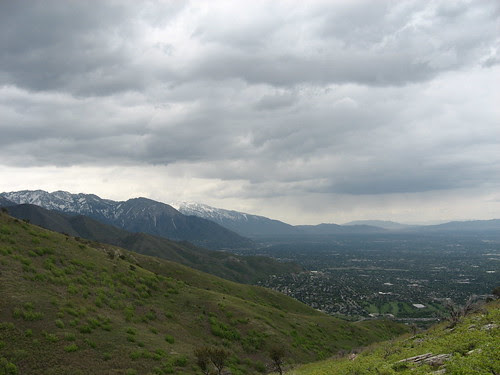 View from the Living Room 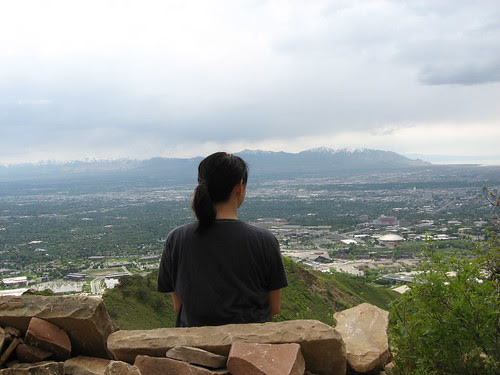 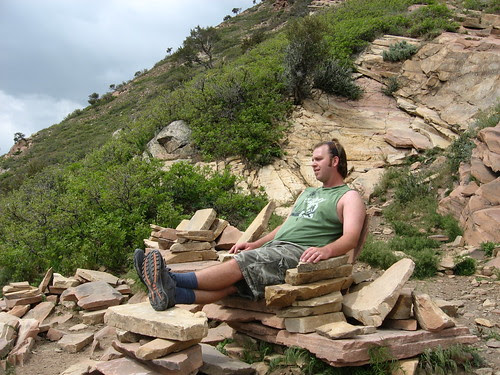 The Living Room is a nice little hike and a quick/easy way to get out and see something unique.
Posted by Unknown at 10:44 PM No comments:

Survival of the Stubbornest

Despite being temporarily homeless the previous week, the HB and I wanted to follow through with our plans to go to Canyonlands the first weekend in May. It was a perfect plan because it wouldn't be too hot or crowded, and my belly wouldn't be too big then.

Ever since reading "the monkey wrench gang" years ago I'd wanted to visit the Needles and Maze districts of Canyonlands where Hayduke hides out at the end. And already being an aficionado for the Utah desert, I needed to go there. But also, last year, my co-worker Joe told me about a place called Paul Bunyan's Potty where they were several Indian ruins to explore and that was fairly off of the beaten path.

So moving all the things from our "extended stay hotel" into our cars we headed out of town, signing the closing papers for our new house on the way down. I won't do a full trip report because the HB is really much better at that, but just had to point out a few things about our trip.

First of all, the "potty" arch was very cool, but I emphasized to the kids (Caiden and his cousins) how cool it was to see the ruins that we did and told them everything I could about the Anasazi. The corn cobs and pottery pieces we saw could have easily been 1500 years old. 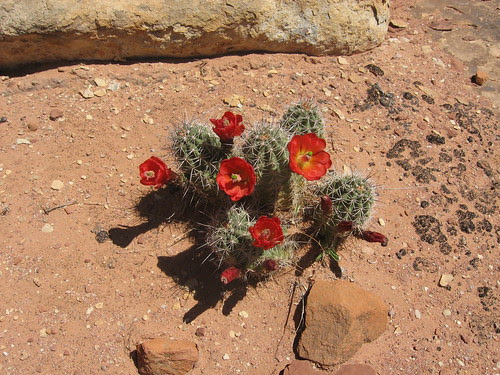 I got a little sunburnt that first day on my thighs--they haven't seen much sun yet--and so when we got back I went for my aloe vera. I opened the pocket in my bag where I could find that to see a clear gooey mess, so I did my best to scoop it out and coat my legs when I realized they were lathering up with my shampoo instead! It was my clear shampoo that had exploded everywhere. At least my legs were clean after that.

The next morning we all re-used our plastic spoons for breakfast (the quantity was limited due to packing in great haste). It reminded me of when April, Bill, Tyler, and I all shared a plastic fork with a prong broken off to eat our dinners on Mt. Timpanogos. 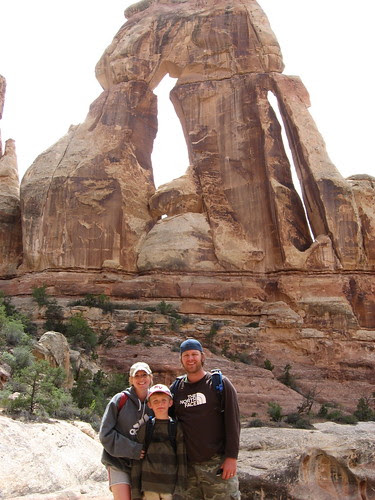 We psyched the kids up for another 11 mile-day and I had to strongly resist the urge to tell them how badass they were for the day before, but I didn't want to be responsible for teaching them to cuss. The entire trail was stunningly beautiful as was Druid Arch when we reached it. The kids were beat but they still played all over the "hamburger" rocks at our campsite when we got back.

On our way out we hit up Newspaper Rock which was totally awesome and then spent a night relaxing in Moab and enjoying the great pub food. The next day we were back in town, a little worn out, but happy to throw our mattresses and things in our new house.
Posted by Alene at 1:13 PM No comments: