Last February we were having some unusually warmer weather and I could no longer fight the urge to get out and get away.  Tyler was out of town for work and had been for over week and I was feeling restless and bored I guess.  I knew the nights would still be too cold for tent camping with my kids so I booked a room in Torrey for 1 night and took my kids and one of their cousins to Capitol Reef.

With a close to 4 hour drive I usually demand that we stay 2 nights but when budget and time is tight and weather was great enough to seriously spend the entire day time outside, it worked out pretty well.

At that point in my daughter's life, and sometimes still, she is pretty sure that she doesn't like hiking, and suggesting it to her is a major disappointment.  However, seriously, once you're outside or on the trail she's just gone, especially with a friend.  So we first just ran along the little boardwalks to see some petroglyphs and then I suggested playing by the Fremont river.


At the river Bailey and her cousin made fairy homes in the sand and Waylon buried his little owl Beanie Boo.  They threw rocks in the river and got plenty sandy.  We stayed in the same small sandy spot along the very cold and rapidly moving river for close to 2 hours. 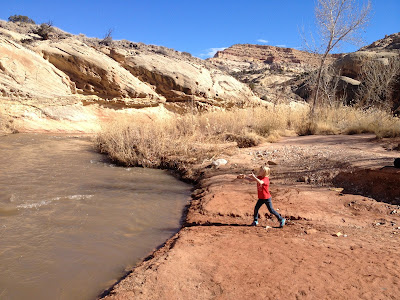 Then we headed over to the Hickman Bridge trail.  We definitely took our time covering the 1 mile to the arch but really because I gave in to the kids desire to explore and play and to put in use our common practice of placing a baby rock in every little nook in the rock walls.  We finished the hike shortly before it was beginning to get dark. 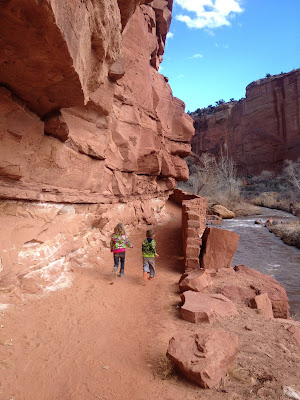 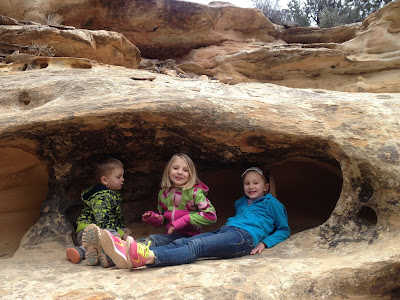 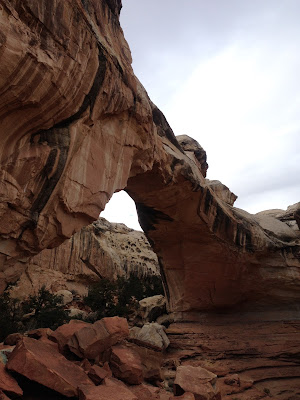 We went back to the hotel and they had a little time to swim at the pool before bed.

The next day we drove back into the park just to check out a few quick things before heading home.  I was a little disappointed that the Nature Center and the Griffin House were not yet open for their busier season.  I hadn't thought about it when I planned the quick getaway and they are not big attractions but add a little fun for kids.  We visited the picnic area and made numerous trips across the big bridge there with towering sandstone walls on each side. 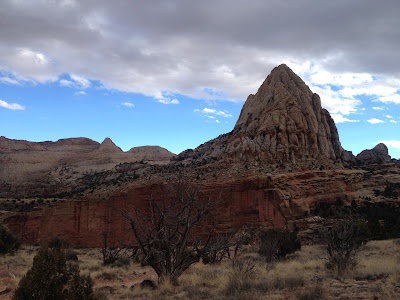 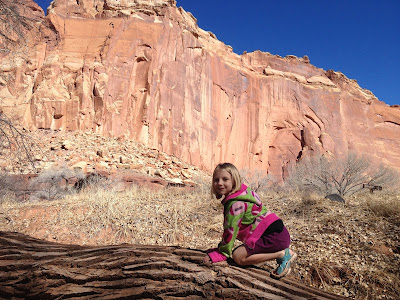 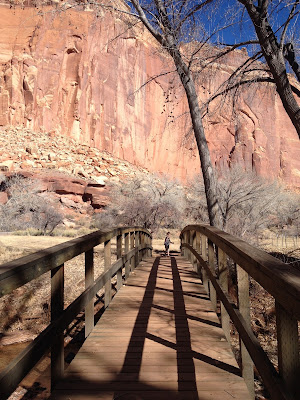 On our way out we did the Goosenecks Overlook short hike.  I was under-impressed with the view for this because the only place you could actually see Sulphur Creek was a really small fenced in rock outcropping.  (I'm hoping to do the top-down Sulphur Creek hike with my kids sometime next year, it's a total winner!)  Otherwise, we mostly again played around on the rocks that were on that trail, with each child claiming various groups of rocks as their little home complete with bedroom, kitchen areas, hot tub, etc. 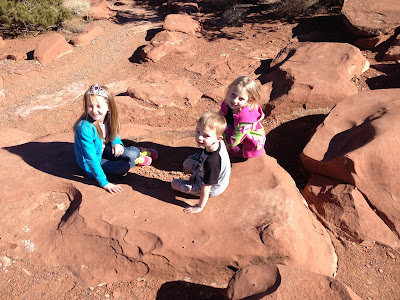 I
absolutely love doing these kinds of trips with the kids.  I have to admit that suppressing my need for daily intense aerobic activity is really hard, but when the kids are clearly loving what we're doing I can do it.  I could see how free they felt to just play in their environment and have no pressures really.  I want them to enjoy being outside and sometimes I want to push them more so they recognize the return, but that time will come.