These videos are a year late, but it's very hard to find time to edit videos. Maybe I'll finish this year's spring break stuff sometime next year. I had originally posted this trip report about our trip, so it's technically logged, but here are the videos:

When Tyler made plans for a weekend backpacking trip in March I planned on just staying home and entertaining our two youngest. That was until the weather was so unbelievably awesome and I realized it would be even more awesome in the San Rafael Swell. I knew I couldn't ask for better conditions and decided to take the kids camping on my own. That means: me, my three-year-old, and my five-month-old were going camping. It would be Waylons' first camping trip so I figured sleeping would be minimal due to new environment and cold nights (though nicer weather than Bailey's first camping trip where I didn't sleep at all). But it seemed do-able considering I was only planning on doing what I could, not getting too ambitious with the hiking, and being very familiar with the area I was going.

Of course I did want some company, and if that company wanted to help when I needed both hands--setting up my tent, starting the fire, etc.--then that would be great. As we all know, it's hard to even set down a 5-month-old because they don't walk / crawl / or even sit on their own yet.

So somehow I suckered my cousin and his girlfriend into coming with me. They had never really experienced the Swell and so I was excited to give them a little taste, despite having little kids along.

We weren't able to leave town until late on Friday afternoon, putting us there well after dark. I got pretty frustrated and overwhelmed when it was super dark and both kids were crying from the long drive. Then I was even more disappointed to discover the site I planned on camping in had already been taken and we'd still have to find something else. We drove a little further down North Temple Wash, (which seemed much more rugged and rough than I remembered it) and just before it opens up again found a site that was up and away from the road, spacious, and secluded like the other one. It had huge rock walls behind it, and an already-built huge firepit. campsite at my tent: 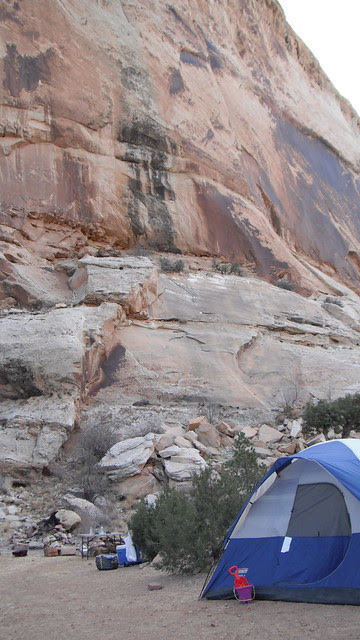 My cousin and his GF set up my tent, and I quickly went about setting up table, coolers, chairs, sleeping pads and bags, etc. After setting up their tent, he started a fire real quick for Bailey who was anxious to have one. However, she hardly lasted long there at all, surprisingly, she wanted to get in her sleeping bag and she promptly went to sleep. Waylon and I hung out by the fire chatting until very late, him asleep in my arms. 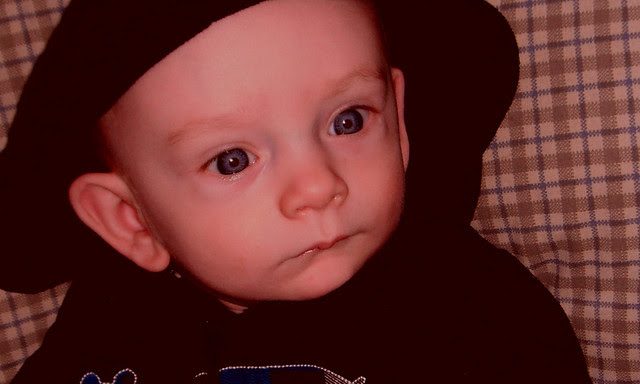 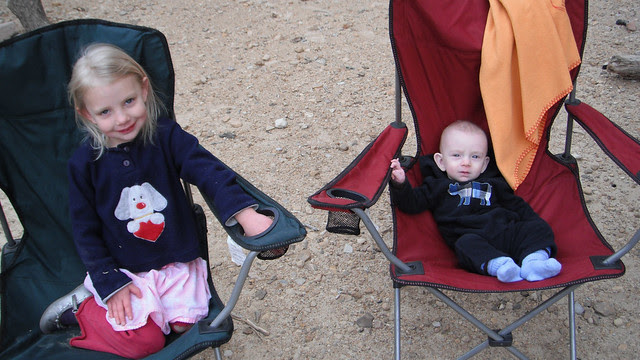 Next morning we decided to head over to Little Wildhorse canyon. As we approached the parking lot was full and I didn't think it would be as good of an experience to battle the crowds, we could see several boy scout troop groups as well as a big trailer marked something "ward". So I decided we'd just head on past these people and hike Ding canyon. This was probably a mistake, I wanted to avoid the crowd, but I forgot how much more difficult Ding canyon is, only because of the obstacles that are totally do-able unless you have a baby in a front carrier and a backpack on your back and a 3-year-old to assist up and around huge boulders. My own fault though, I urged my cousin and friend to go ahead of me when we were in the sandy wash prior to the canyon because there Bailey was getting tired and frustrated. So I was left to do the hike on my own with the kids. I do have to say though that once we were in the actual canyon Bailey was a total champ hiker! She practically runs through the slot areas, singing and shouting, climbing, and occasionally asking for some help. We found an open area with sand to give Waylon a long break, have snacks, play and relax.

playing in the sand 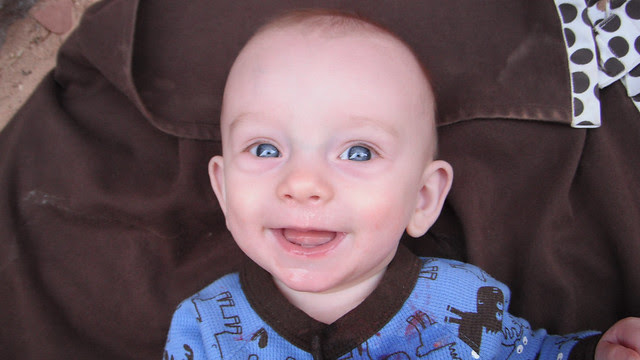 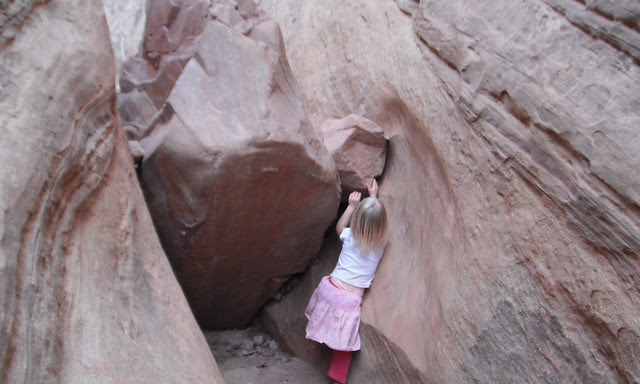 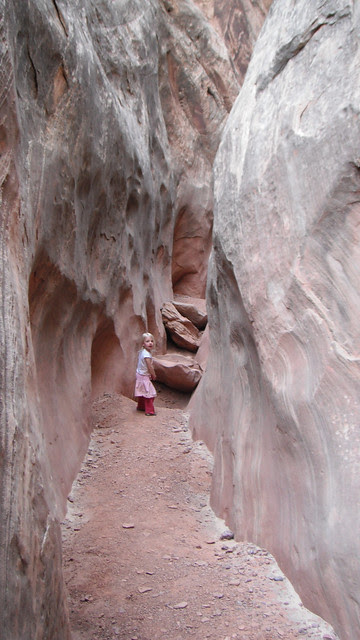 I had considerable more difficulty heading back down the canyon as it was much easier to push Bailey up something than to hand her down while Waylon was on my front. Finally at the canyon entrance's first obstacle I ended up waiting with the kids for a long time, thinking maybe someone would come along that I could just pass Waylon down to instead of having to make the short straddle, slide, and jump with him strapped onto me. But after enough rock throwing, sand playing, feeding, diaper changes and snacks I decided I would just have to do it. I laid him in a blanket on the sand, got down and got Bailey down, climbed back up, strapped him on and we did it.

As we were headed back to the truck my cousin met up with us having completed the whole Ding-Dang loop. He carried Bailey as she was pretty spent and the sandy wash hiking is not at all exciting. She quickly fell asleep on his shoulders.

We headed back to camp, made a fire, had dinner, and I shortly thereafter headed to bed with the kids. Of course that didn't last long and we were up several times in the night, the two of them waking up each other and not allowing me to sleep much at all.

Next morning again though, Bailey was all up for hiking all around our campsite while we took everything down and packed up the truck. I was tired and the day was quickly passing so we settled on just exploring Goblin Valley a bit before heading back home. Goblin is always a hit for Bailey and instead of pushing to see more I just let her lead me around. We did a little hide-and-seek, a little red-light-green-light and general climbing and exploring and then headed back.

My cousin and his GF were back at the truck from their exploring and we consensually decided to get out of town and back to our homes before the day would be over.

It was a good trip, the weather was nice, my kids had a great time, and I now know I can take them camping and hiking on my own, though I'm not too anxious to do it again anytime soon. I definitely missed Tyler's help and love being with him anyway. I remember camping getting much easier when my kids start walking so now I feel more confident that I can do this again in the future should he be unavailable.

My camera had some troubles and I was able to retrieve these photos after some work. I'm just sad that not all of them were recoverable. I'm not a photographer, but pictures of my kids are invaluable to me and I'm still pretty sad that a few didn't turn out, Waylon's barefeet in the sand, Bailey holding him in a little hole in the side of the rock, I want to keep those images in my head forever.
Posted by Alene at 11:52 AM No comments: