Bailey and I snuck up for a night of camping in the Uintas with my sister's family last weekend. They already had plans and it wasn't too hard for me to throw some stuff together and meet them. I was excited about the impulsiveness of it and the chance to actually get out with less than a 2 hour drive. But the truth is I just don't get as excited about going to the Uintas as I do the desert. Despite growing up in Montana and still loving the beauty there, somewhere along the way I fell in love with the desert, most likely when I did my two-month dig there in 2001, but I"d had it coming long before then too.

When I first moved to Israel in 2000 I couldn't believe how brown most of it was. Just brown. Not exactly how you might have pictured "the fertile crescent." But I loved it, I never minded it, it was full for me because of all the mysteries there, all the passion there, all the godliness there. I remembered a quote from reading "the Little Prince" earlier that said: "What makes the desert beautiful is that somewhere it hides a well." (I'm sure I've said this somewhere before, but hey, I feel passionately about it.)

So heading to the Uintas is a nice change when the desert is too hot or when I need a quicker getaway, but doesn't quite fulfill my hunger. And I have to also confess that I couldn't stand the sense that I hadn't really escaped at all when I am driving and its as busy as a Japanese train station there. Lots of waiting behinds lines of vans, cars, trucks, campers, etc. Packed campgrounds (I'm not fond of campgrounds in general, but when you're sort of planning on doing that kind of thing it sucks when they're all full).

Lucky for me, my sister and her husband had scouted out ahead of me and decided to scrap the campgrounds altogether. They waited for me to meet up with them and we quickly found a site not much further that was off the main drag.

We set up camp and proceeded to battle the mosquitoes full force. We drove to a nearby spot and ate dinner, played in the water, and saw just how dirty the kids could get.

By bedtime Bailey had done the best she could to dirty up those jammies of hers. 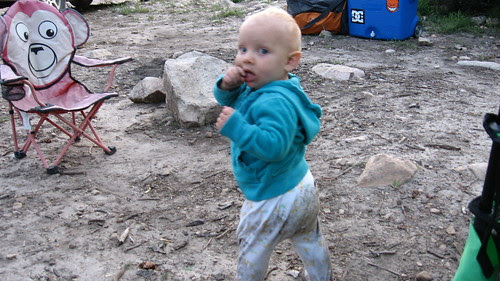 I caught my nephew putting a rock in my cooler, but later on I found that he had snuck in many more than just that one. I consider his little rocks signs of endearment. 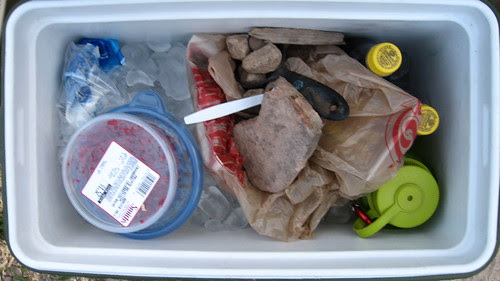 Next morning we went for a short hike. Truth was as much as I like a good hike, I was not sure I was up for carrying Bailey for another 5-miler so after having just done it the last weekend (I need to toughen up a bit), coupled with the mosquito problem, we all decided to play a little and head back. We had only done a little over mile from the parking lot to Cliff Lake and slightly beyond. A sort of reverse version of the Clyde Lake loop Tyler and I had done a few years back.

Bailey was having a good time just standing by this little log. 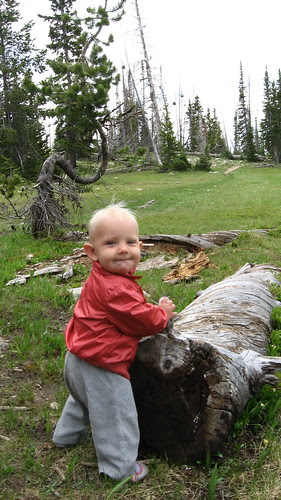 It started drizzling just before we reached the parking lot and then Bailey had a solid car nap the whole way home. I think she was making up for not being such a good sleeper in the tent and helping me out since nothing sucks like driving alone with a crying baby.

I would have liked it if Tyler had been able to come to, but I did enjoy the benefits of buying fig newtons instead of oreos and pastrami instead of turkey.

Bill took some great photos of the lake and all of the kids. See his set on Flickr here.
Posted by Alene at 12:05 PM 1 comment:

Email ThisBlogThis!Share to TwitterShare to FacebookShare to Pinterest
Labels: Uintas

On Friday I took the day off from work to do a hike with the family and Alene's sister, April, and her kids. We endedp hiking up to Silver Lake. Now, I know there a million Silver Lakes in Utah, so to avoid any confusion, this one is located up American Fork canyon.

You start off by making your way up to Tibble Fork reservoir, then you keep driving on the switch-back road (still paved) beyond Tibble Fork. After a few miles there is a dirt road that veers off to the right (right before the Granite flat campground), and you follow that dirt road for 6 miles or so up to Silver Flat reservoir. From there the trailhead starts and you work your way up the mountain. It's a 5 mile hike round trip, but doable for families. I'd HIGHLY suggest not bringing your jog stroller on this path like a family we saw attempting to do. There are a couple of stream crossings, one of which requires rock-hopping. As you get closer to the top, it gets a bit more grueling, but it really isn't a bad hike. If you're out of shape (like me) you'll feel it when you get up there and the next day for sure.

Here are some pictures and video clips of this hike: 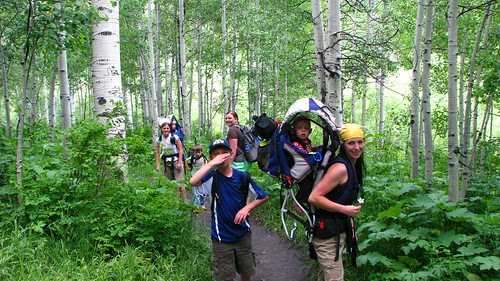 A few of the 3-4 streams you cross 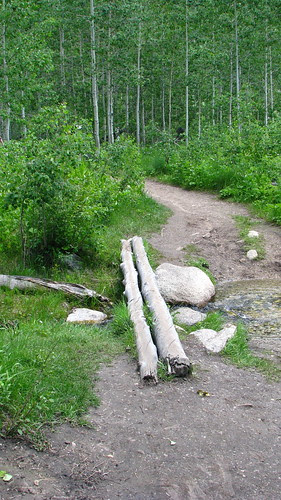 Bailey knows how to hike in style 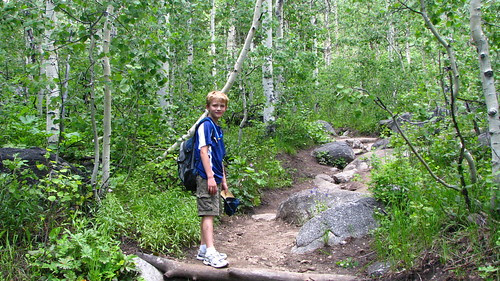 This tree has been expecting me..... 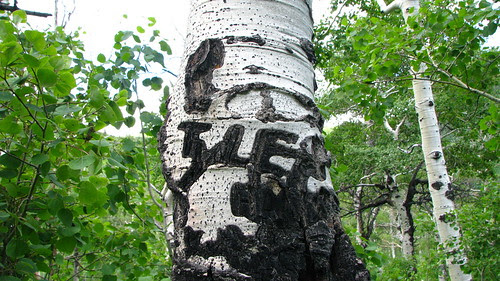 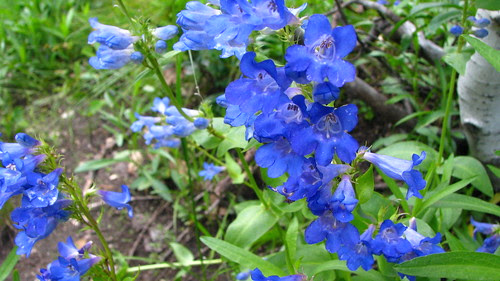 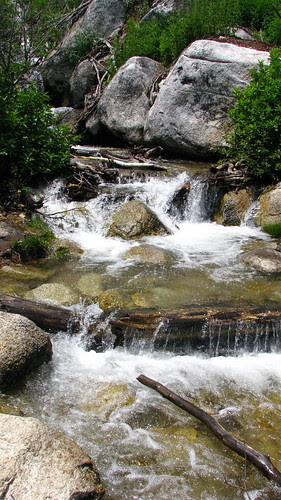 As we got closer, we could see two waterfalls cascading down from Silver Lake 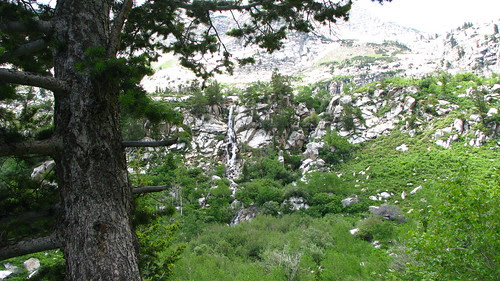 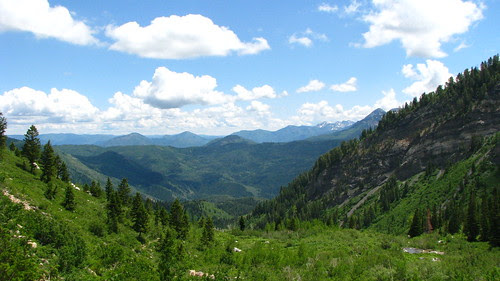 Finally at the lake. There were about 5-6 other groups of people up there too. 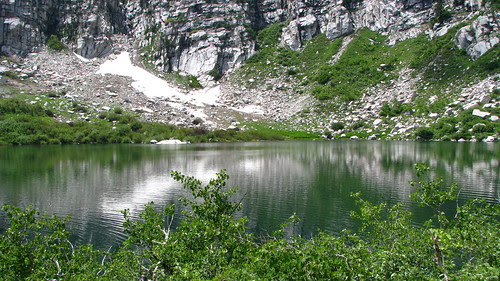 Bailey with her mommy 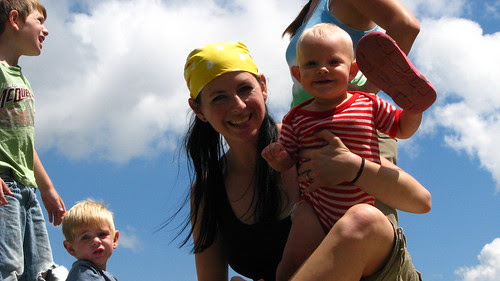 Bailey with her brother 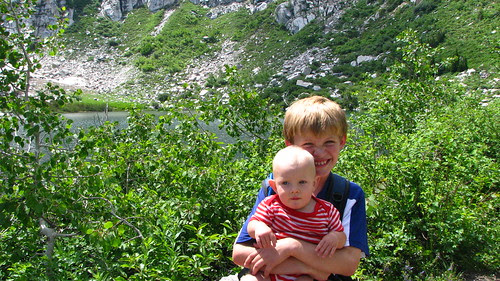 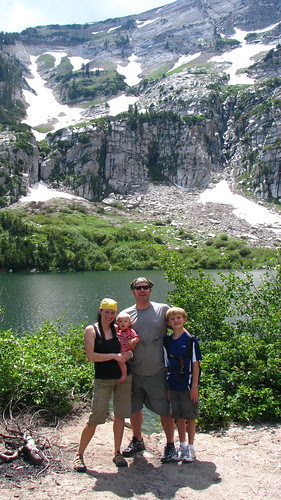 Bailey LOVED splashing her feet in the water 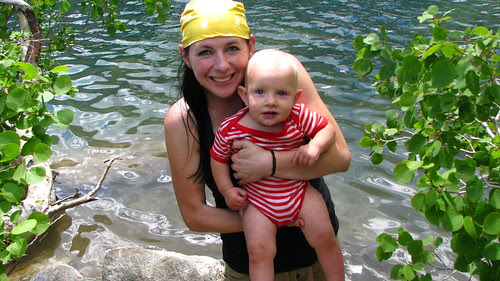 Video of the entire lake