Places I want to see/hike

Cedar Mesa
- Don't know enough of it specifically, but I'll post more later once I start the research

Canyonlands
- Island in the Sky
- The Maze
- Needles

Wasatch Front
-
Posted by Unknown at 3:05 PM No comments:

We had the great pleasure of being invited to Bill's birthday camping trip, which has been an on-going tradition for him for quite a few years. I remember my first trip with them (Alene, April, and Bill) was before Alene and I were married. Looking back, I'm sure Bill was wondering what the hell Alene was thinking marrying me. I remember packing in a ton of excessive stuff for the trip. Extra clothes, a 10'x10' canopy (you know, for shade), a 6' banquet table and many other un-necessary items. I still pack in a table (but it's only a 3' table), but other than that, I pride myself on bringing as little as possible and with every trip I get better and better about it.

Like clothing. Now I bring one pair of pants (no matter how long we're there), and one pair of shorts. I'll also have one long sleeved shirt, a short sleeved shirt, a fleece sweater of sorts, and either a jacket or a light wind breaker, depending on the weather. I bring a little extra for Caiden because dude knows how to get dirty!

Anyway, onto the trip.

We left SLC as it was beginning to rain and snow. We left on good news that we had just received an offer on our house, so it was exciting to be getting away, knowing our house is likely going to sell.

The area Bill was taking us to is called Keg Spring. It's East of the san rafael reef and just north of Horseshoe Canyon, where Alene and I were last month. This particular site was very close to the Green River (within walking distance to a canyon rim). Bill had been down to this site last Fall, so he had a chance to scope it out and knew exactly where to take us. The site was PERFECT. You had a great view of everything around you. We could see parts of Canyonlands with bill's binoculars. It was awesome.

Here is the view from our campsite looking East: 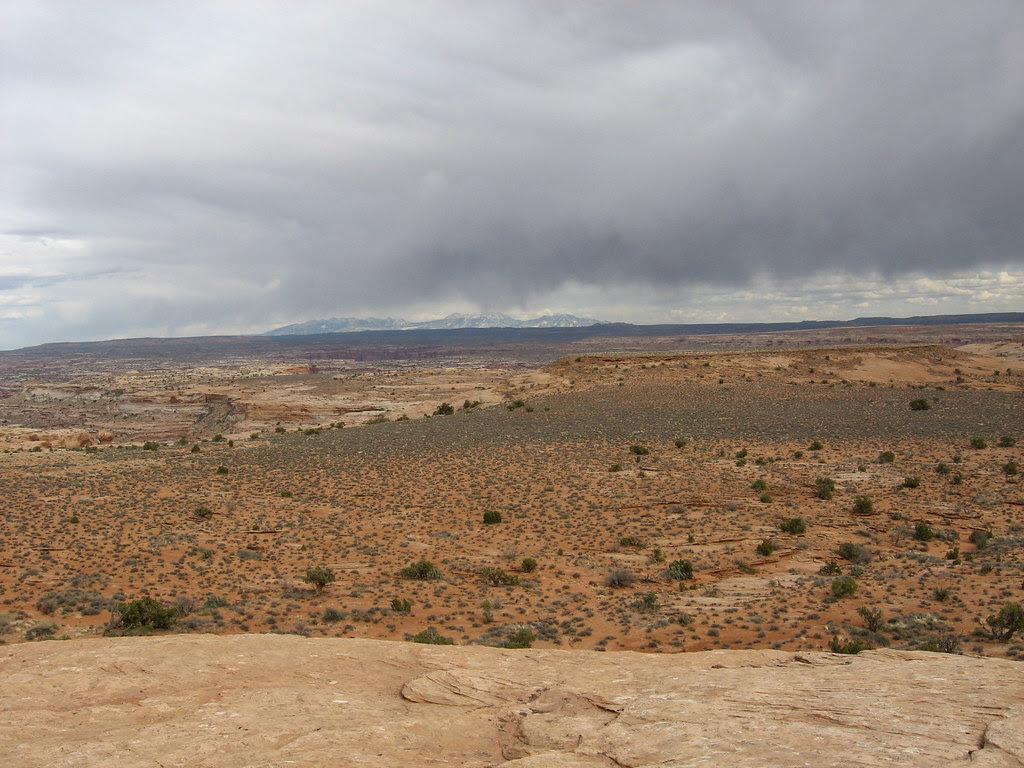 Bill has many more pictures of this area HERE.

After getting camp set up, we embarked out to hike to colonnade arch, which is a series of 5-7 arches (depending on how you look at it). I was really wanting to get out to see it because of Bill's pictures from his trip last fall. The hike in was fun and easy and getting there was cool. I felt like it was almost like we discovered something no one else had seen. It kind of sat on the edge of a cliff (not that dangerous, but your view right from the arch area was of the Green River and twomile canyon.

Here are pictures of Colonnade Arch. Click HERE to see all the pictures from this hike: 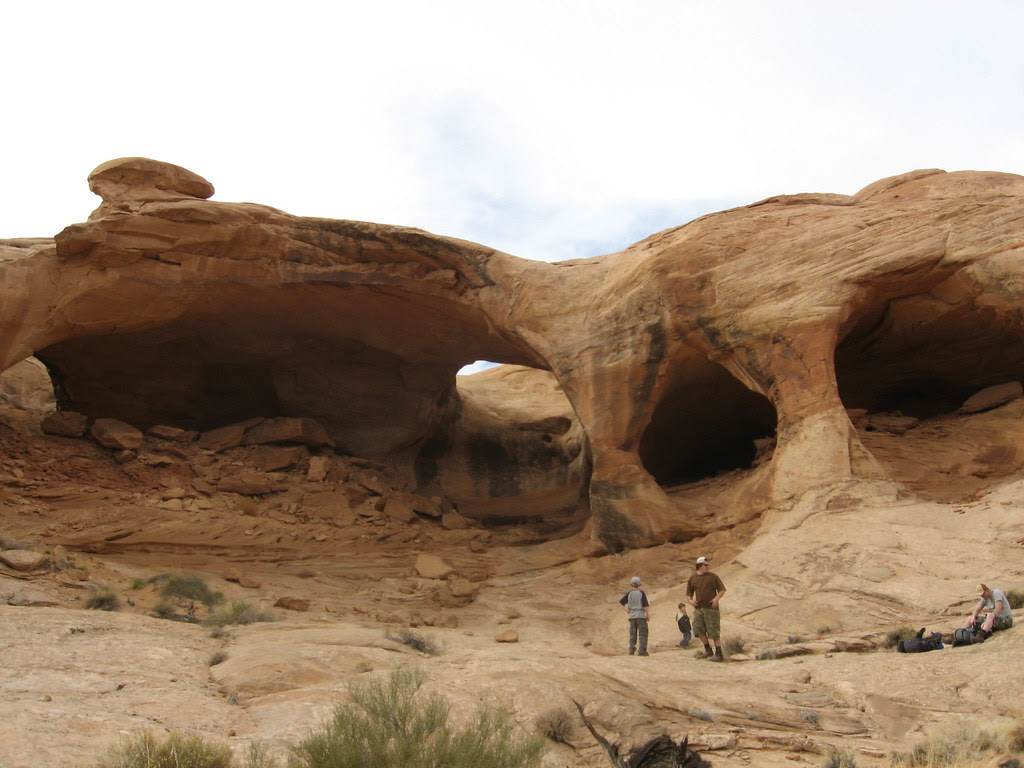 Looking at the Green River in the background, from inside one of the arches 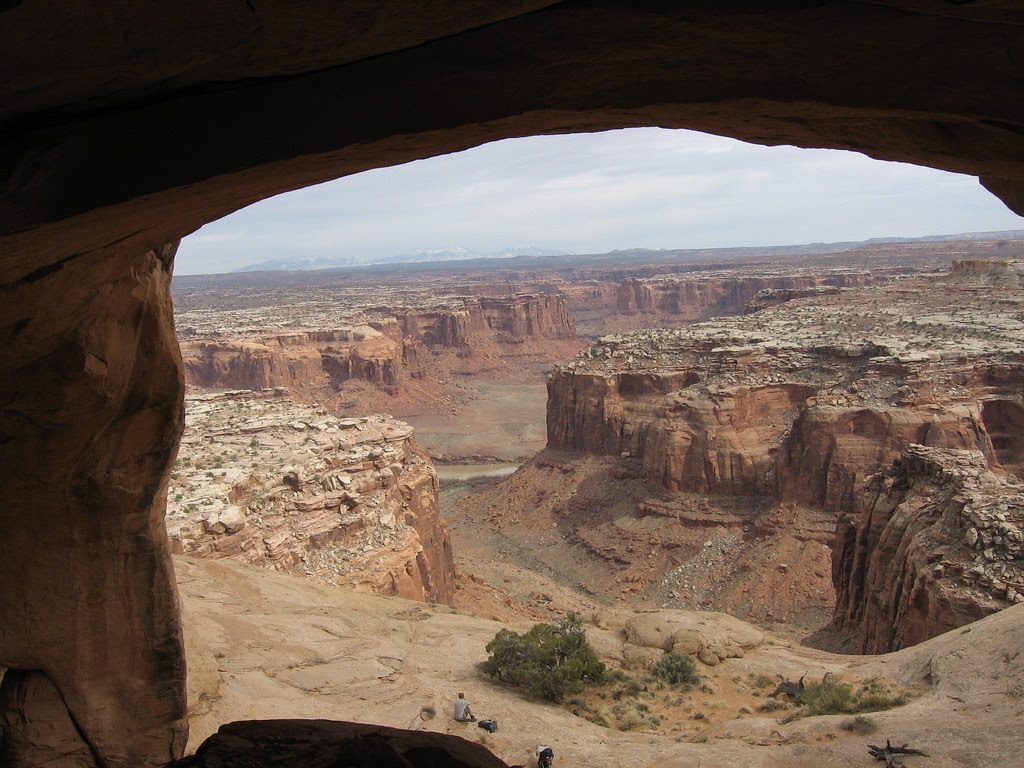 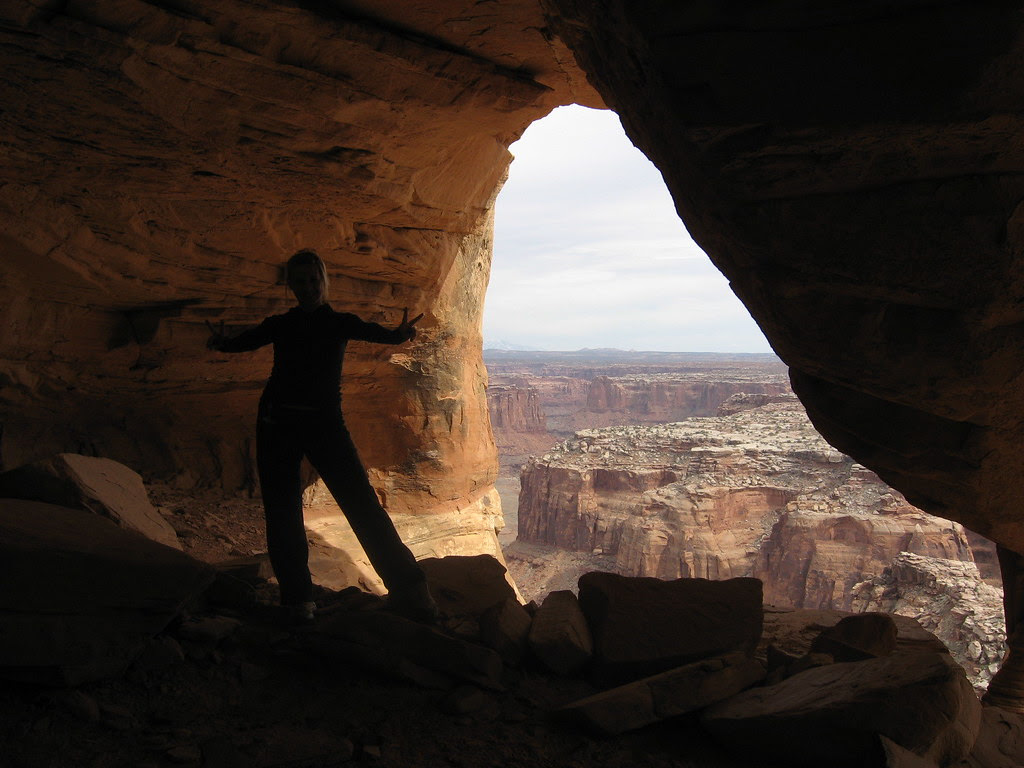 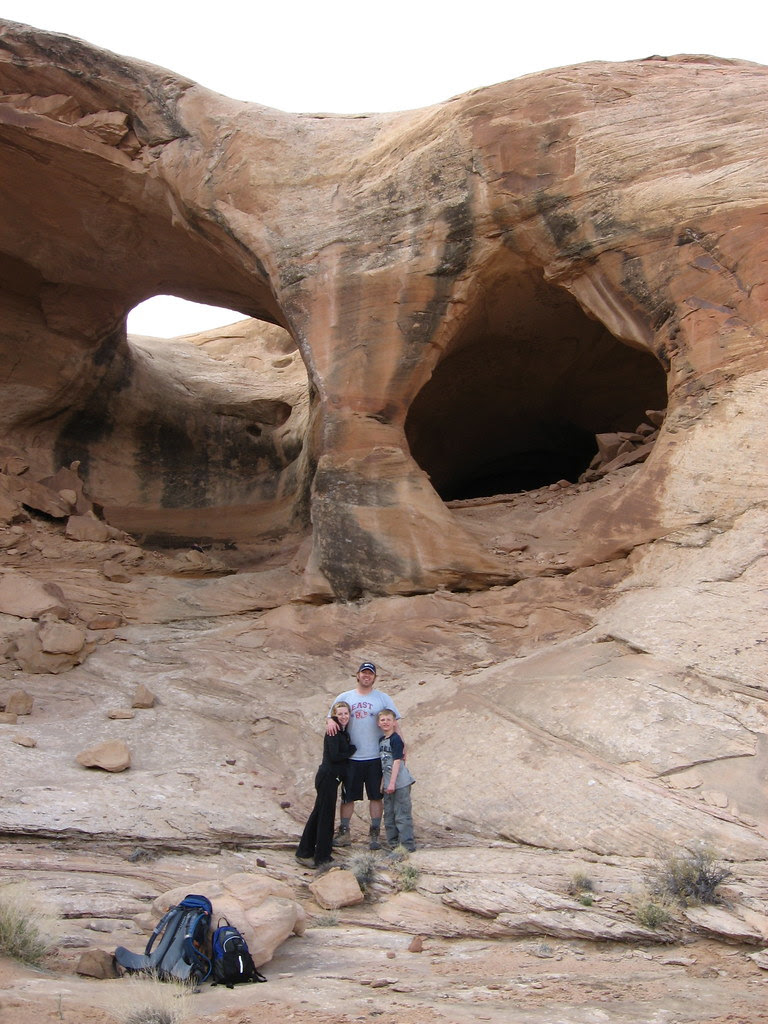 This was a weird formation that was circled with other rocks. Bill had seen a faded picture of it at the trailhead last Fall and wondered what it was. It's still speculation, but some have said it's some sort of lichen formed and eventually turned to stone, or just a tougher part of the rock that caused the concretion 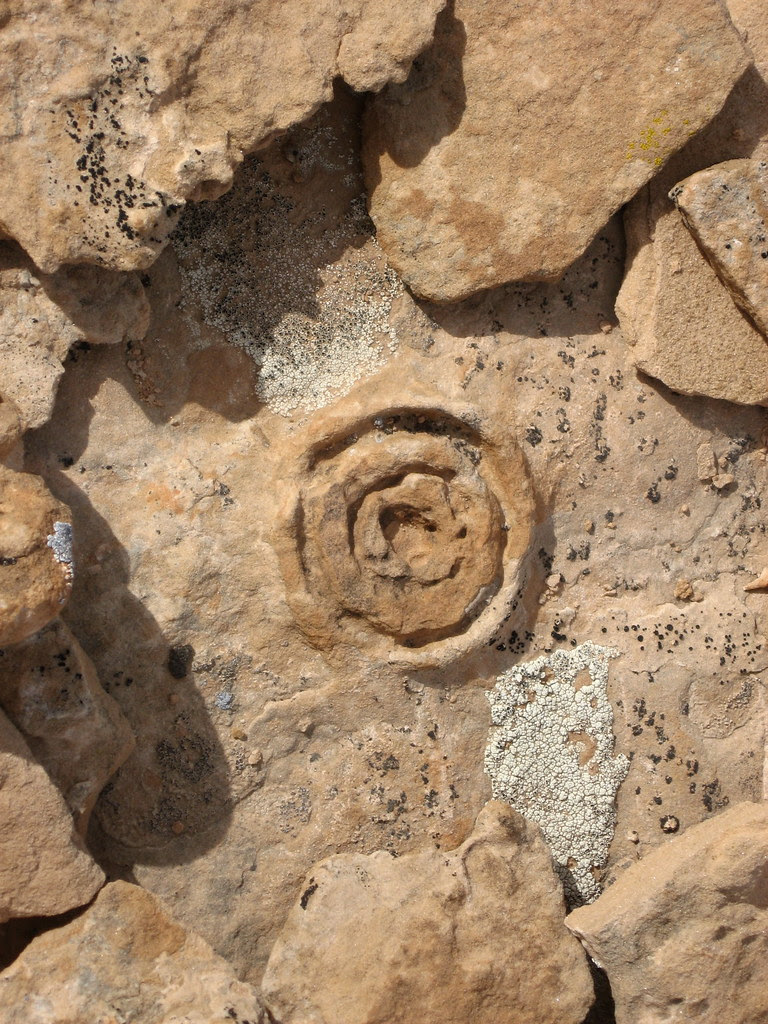 After that hike we went back to camp and just chilled the rest of the night.

The next day (Saturday), we got up, did the breakfast thing and prepared for being away from camp for the day. Bill was taking us to Moonshine Wash and after that, planned on exploring the area via our vehicles.

Moonshine wash lived up to the hype. That place was AWESOME. The narrows there were so cool. Unfortunately, we had to cut our trip short and we never made it to where we wanted to, which was an old 9' long sheep bridge (click HERE for Bill's picture he took last fall) which runs across the top of the canyon. It's totally old and not passable anymore, but it still stands, which is cool. Bill and April were having problems you would expect when having to haul a 1 year old on your back and a distracted 4 year old. Bill keeps telling me, "I can't WAIT for you to deal with this". Anyway, we decided to go ahead of them, thinking they would eventually catch up. As we made way down canyon, there were some serious drop-offs that I had doubts we would be able to get back up. I believe we went down about 5 of them, when realized nobody was catching up behind us. We had no idea how far we had to go to get to the famous sheep bridge, so we waited a bit, yelled for April and Bill, but heard nothing in return. We decided to make our way back to them and had to climb back up all those drop offs. I was impressed that we were able to get out and pull Caiden out as well.

We made our way back out and saw an older couple hiking the canyon. They said they saw our group on the rim of the canyon, working their way back. I immediately scrambled out of the canyon and looked around to see nobody. I looked back down to where we had been and I got pissed because in the distance I could see the sheep bridge and knew we weren't that far away from it when we turned around. Oh well. This is definitely a place I will be coming back to. Not only do I want to see the sheep bridge myself, I want to work my way up the side canyon for which Moonshine Wash is famous for. Up this canyon is a set of man-made cement bins made for making moonshine back in the prohibition era. There is apparently a natural spring in this area too.

We made our way back up to the trailhead just as Bill and the posse were getting ready to take off. They figured we would find our way back and they were going to leave us a note to meet them back at camp.

Here are some pictures form Moonshine Wash. Click HERE for the complete set: 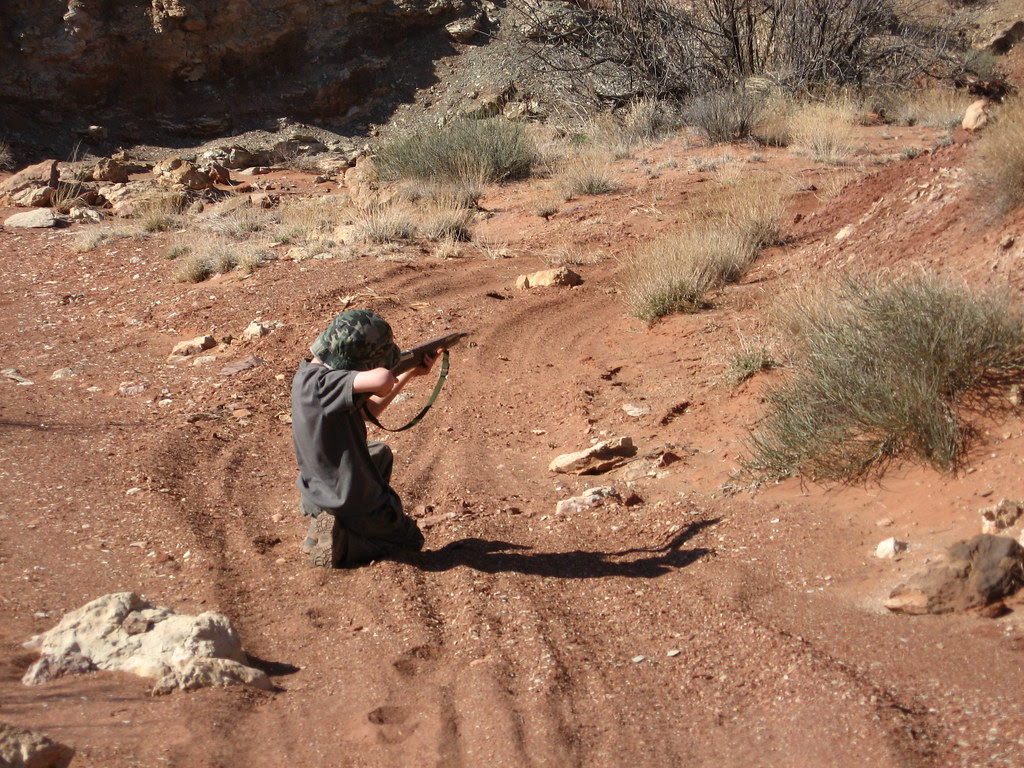 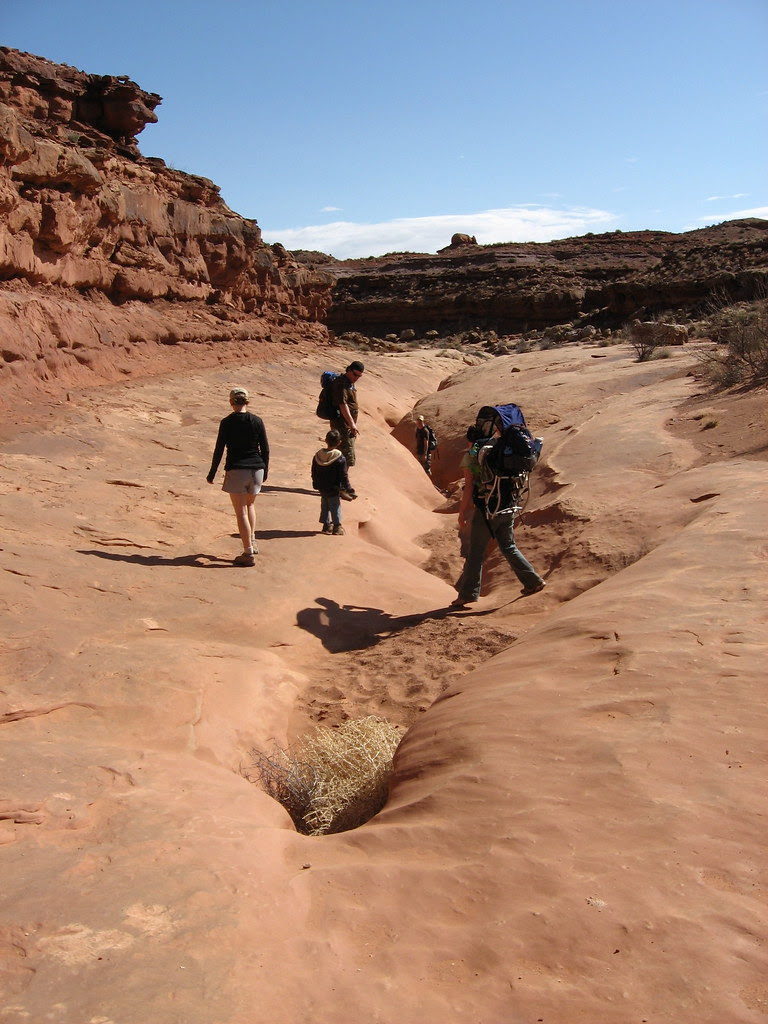 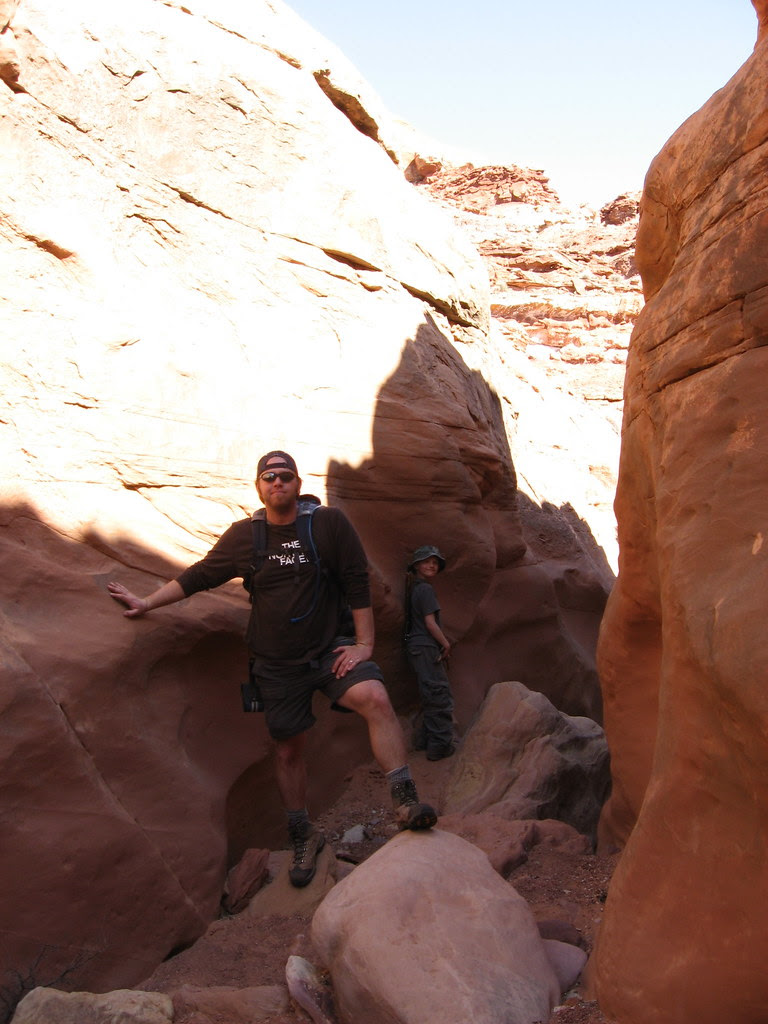 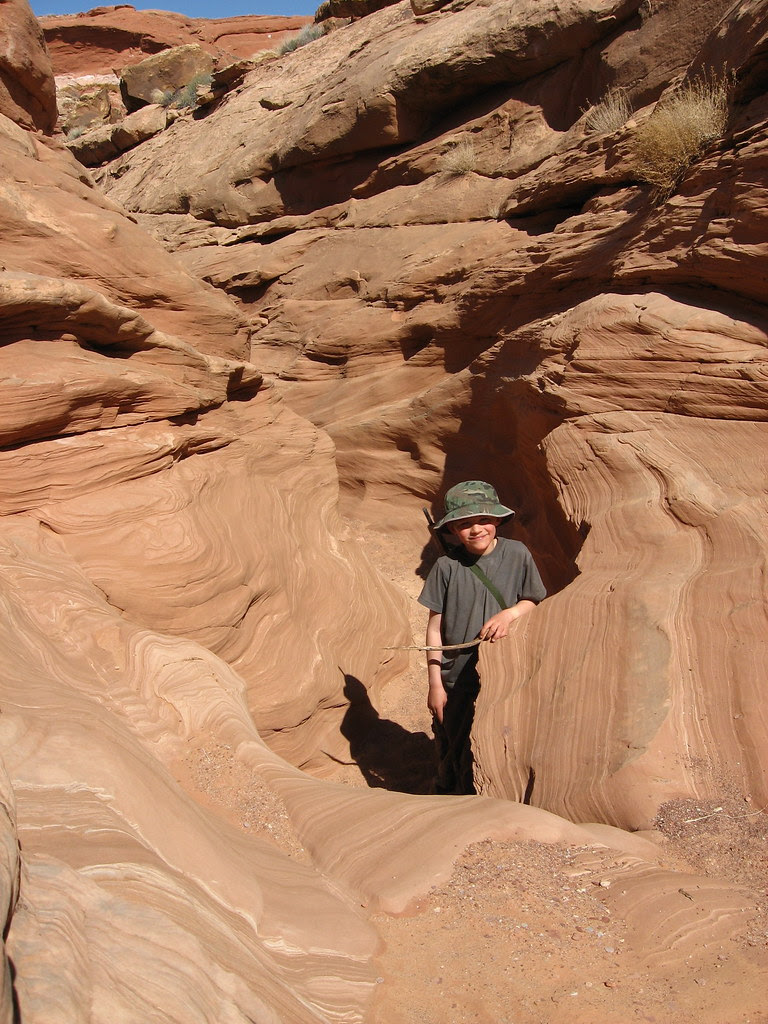 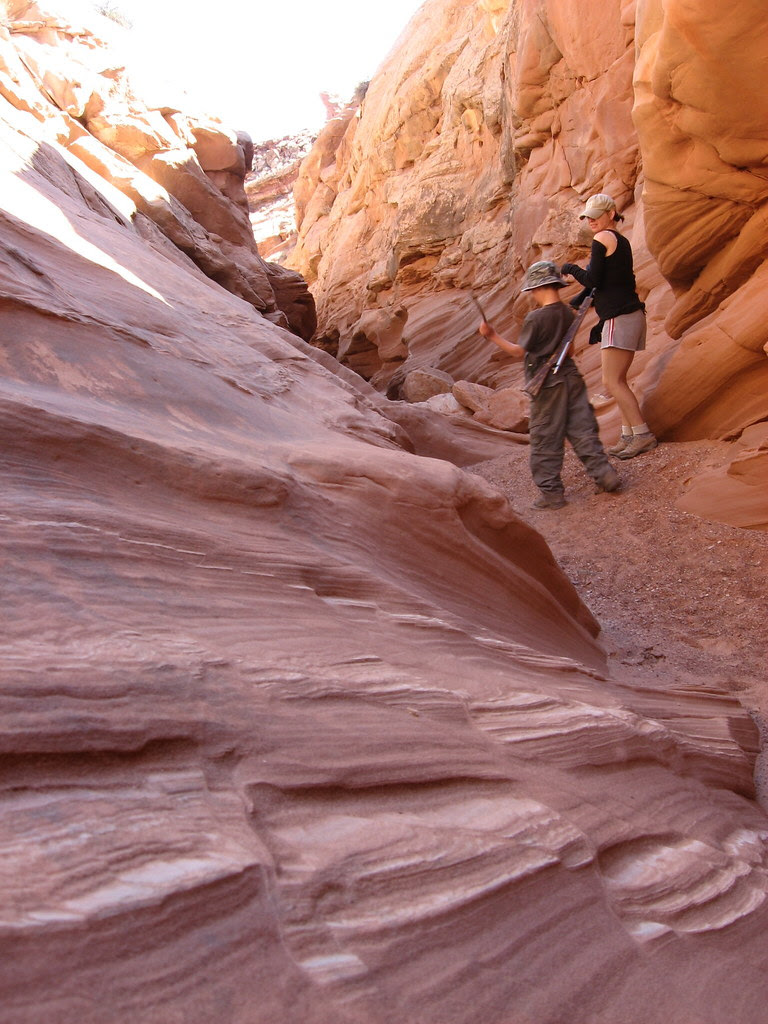 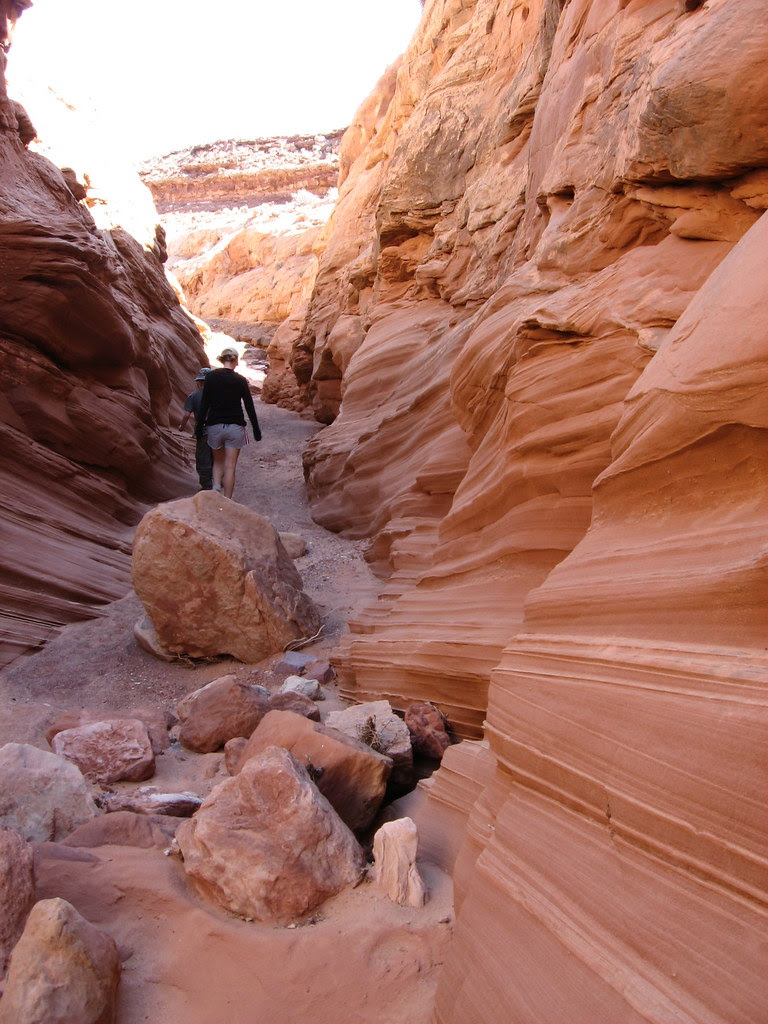 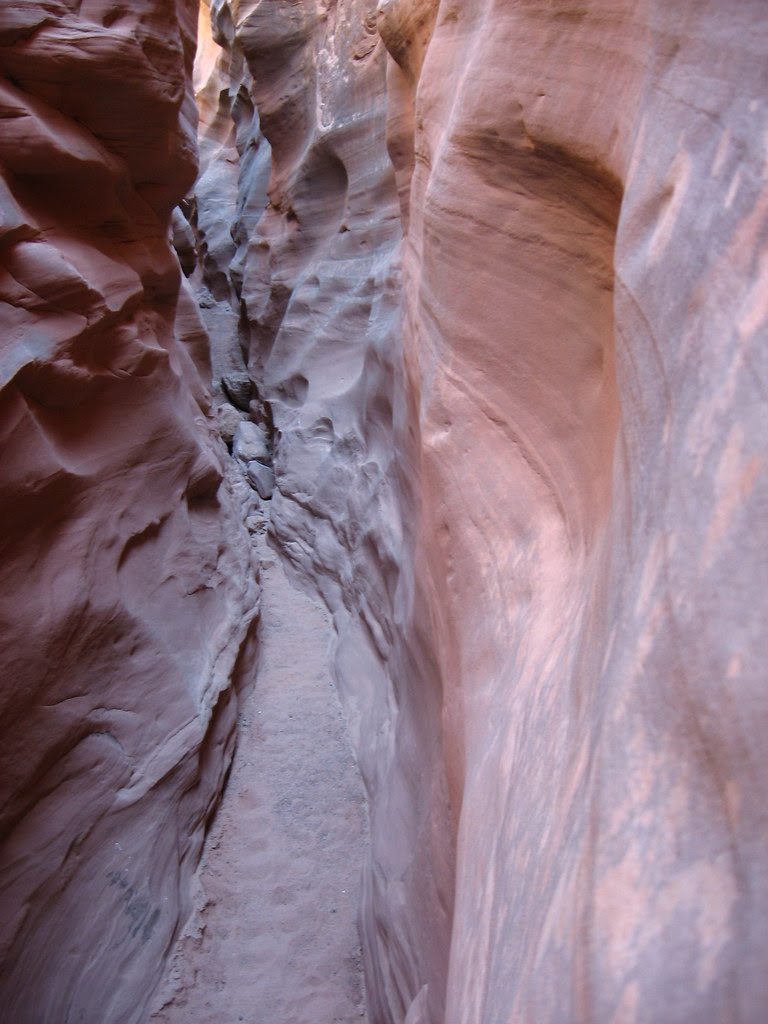 Trying to find my way up a dry fall 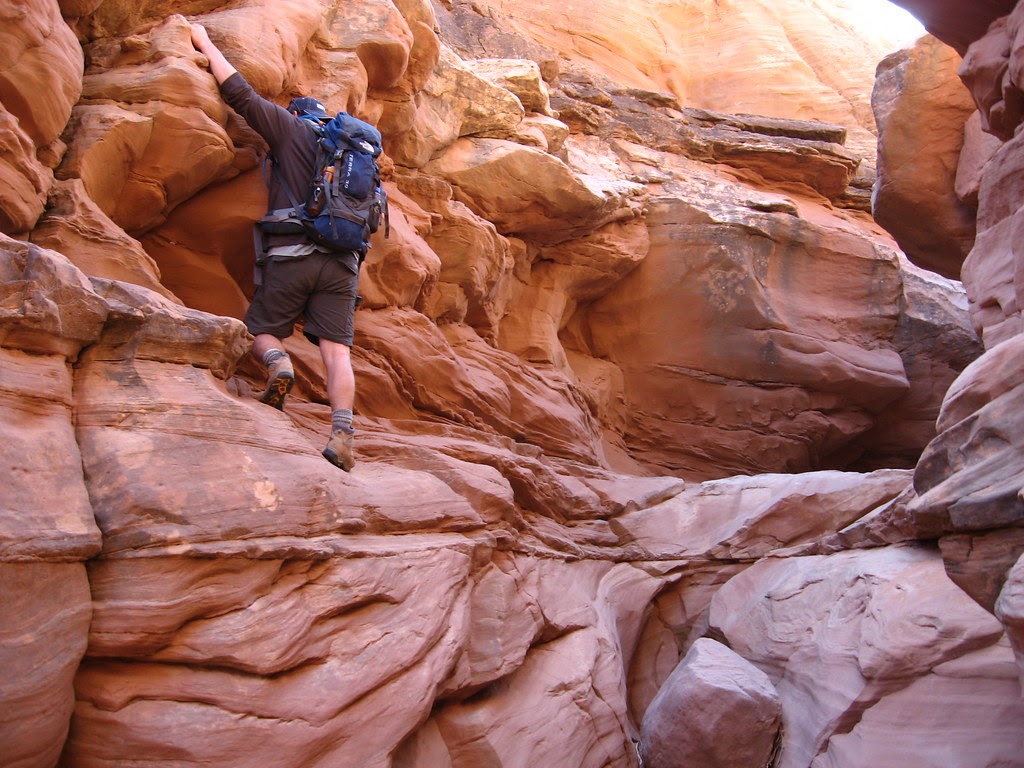 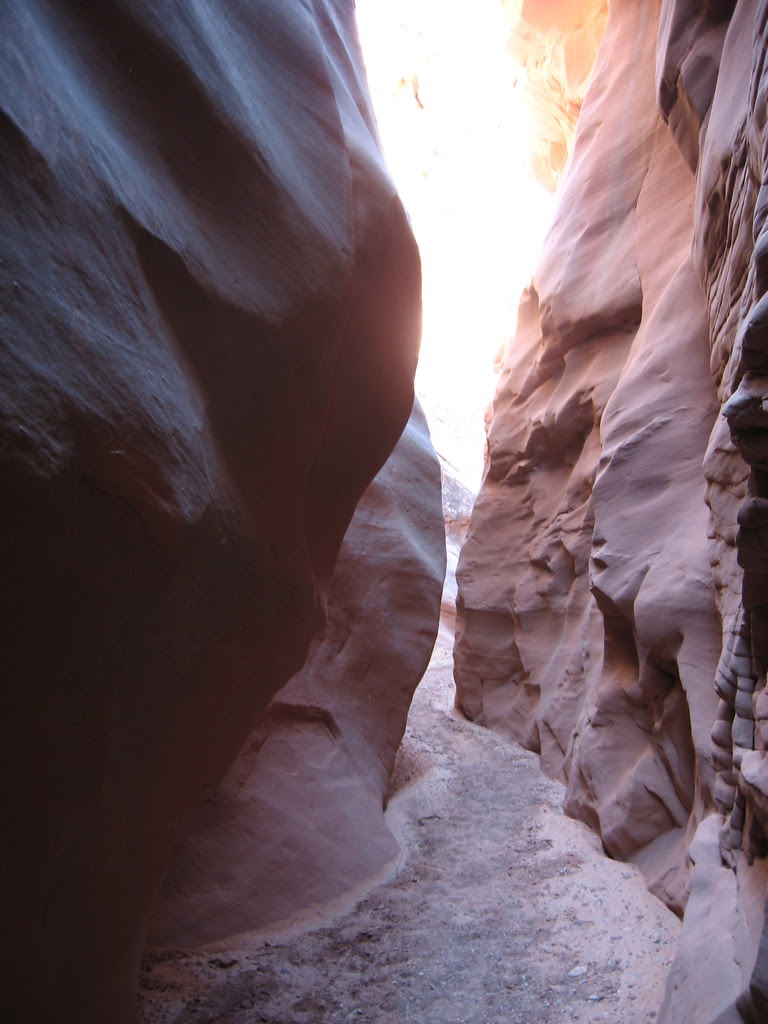 Since we were able to catch up with Bill and the posse, we were able to follow them around to a couple of off-road trails that lead to the Green River. The first one was called Bull Bottom, which is a spot where a switchback trail was carved out against the canyon wall to bring cattle from the canyon rim, down to the river bottom for grazing (and I'm sure a little Green River water). The trail was so skinny, which begged the question: "I wonder how many cows fell off the trail to the canyon floor?" Clint had been reading about the Green River a lot and felt a connection to it so he decided to head up canyon a bit and take a naked dip to complete his closeness. None of us thought he would do it, but he did.

Here are a few pictures of Bull Bottom: 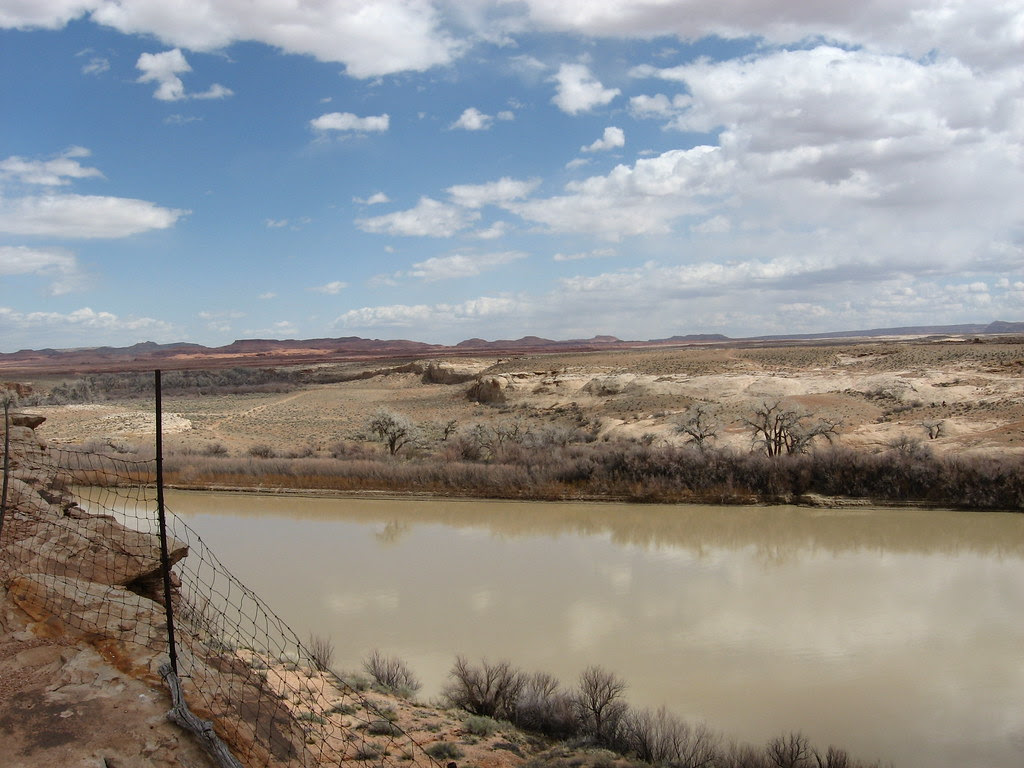 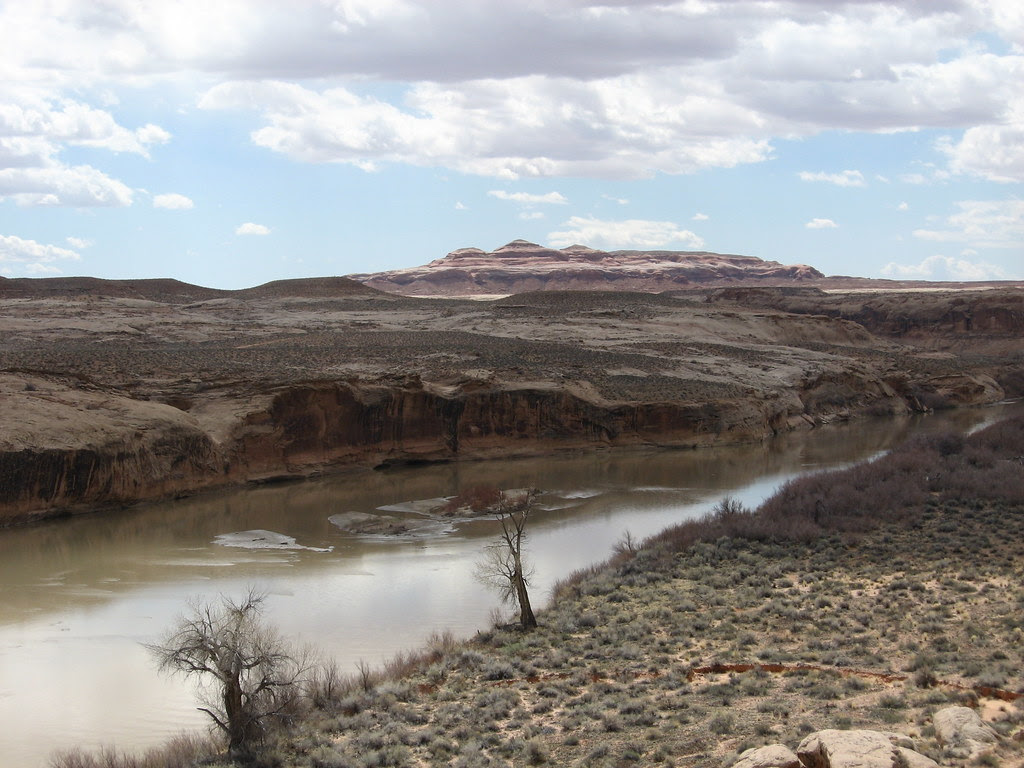 After visiting Bull Bottom, Bill drove us up to the Wolverton Canyon over-look, which was an amazing view of the Green River. Click HERE for the set of the rest of these pictures: 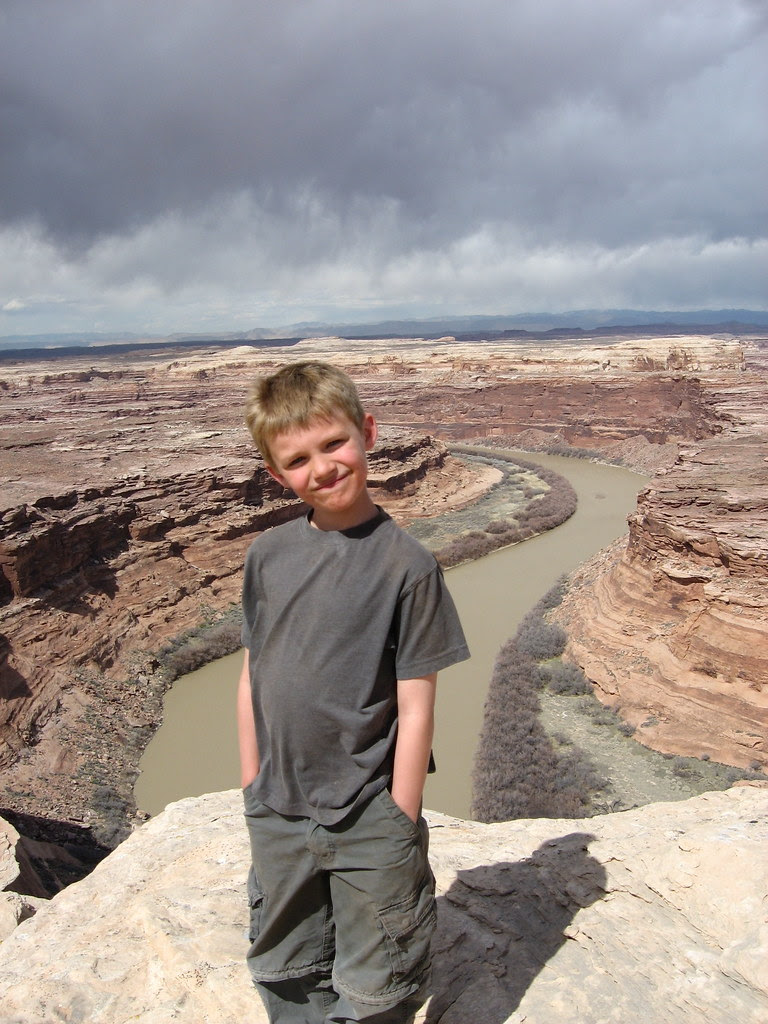 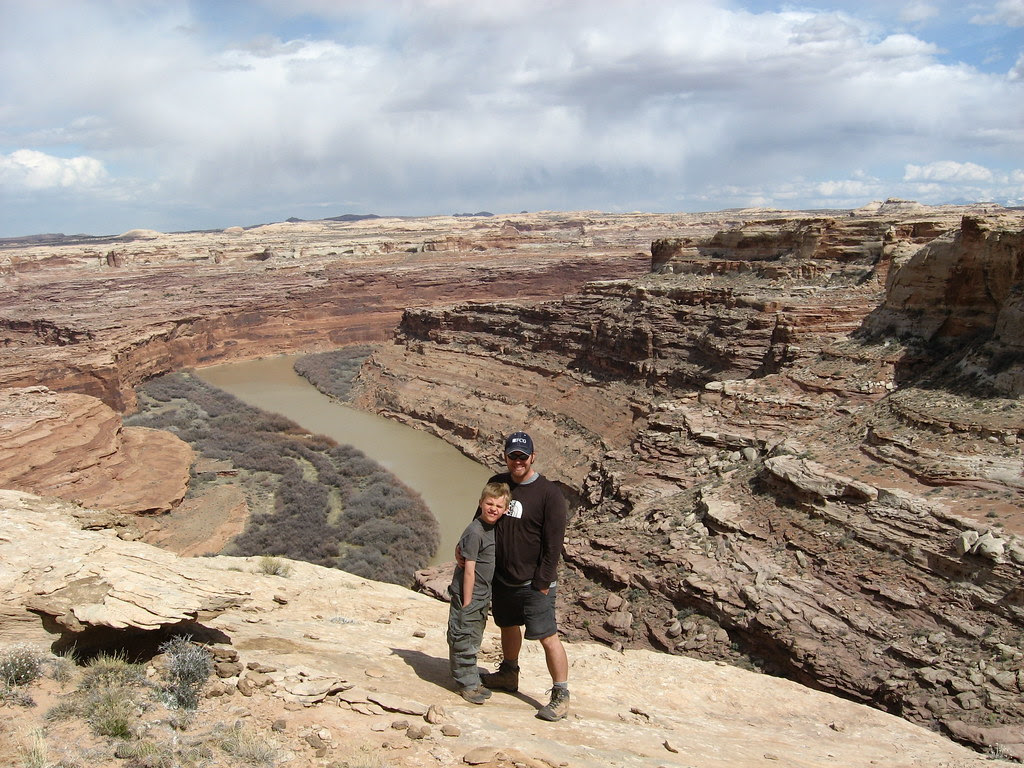 On Sunday we ended up packing up and just heading out to Goblin Valley to hike around. Caiden loves that place. This time we hiked the N/NE area and worked our way south. We got a little scared because we scrambled so far back there and to the southern area and came to a halt because of a DEEEEP cave-type thing that had to have dropped about 40'. It was freaky because we had to turn around and go back and find our way out. It may seem impossible, but we got a little lost back there.

Here are some pictures from the trip. Click HERE for a link to our set.

It doesn't look like much, but this was really scary and dropped off on each side about 30'. 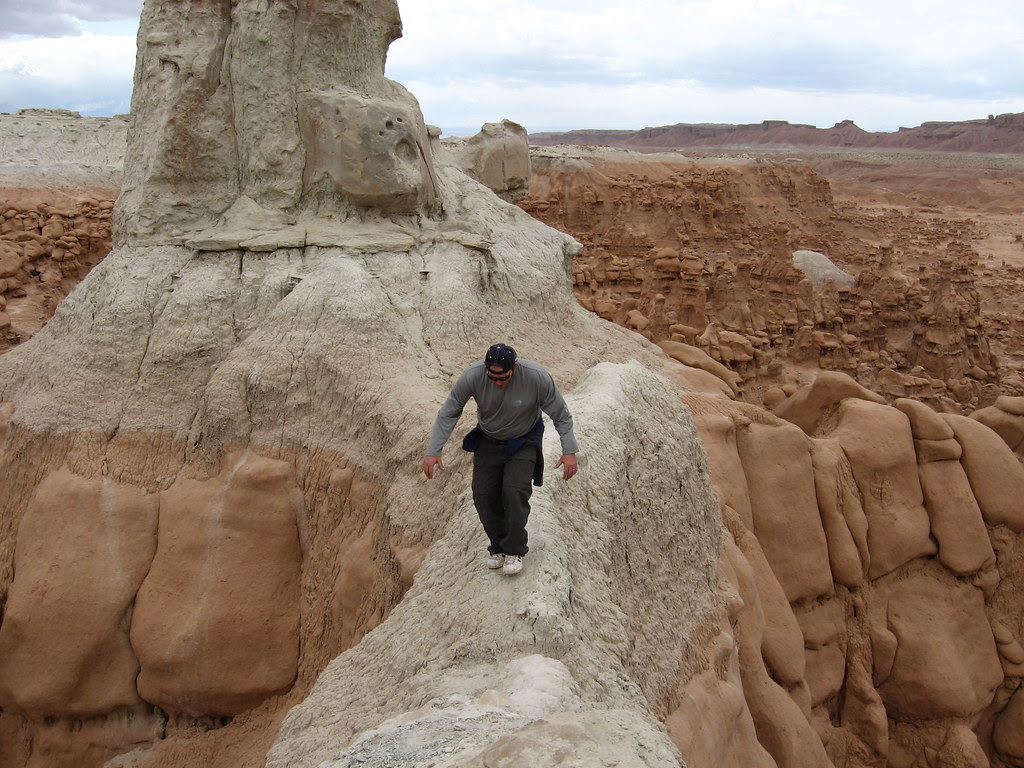 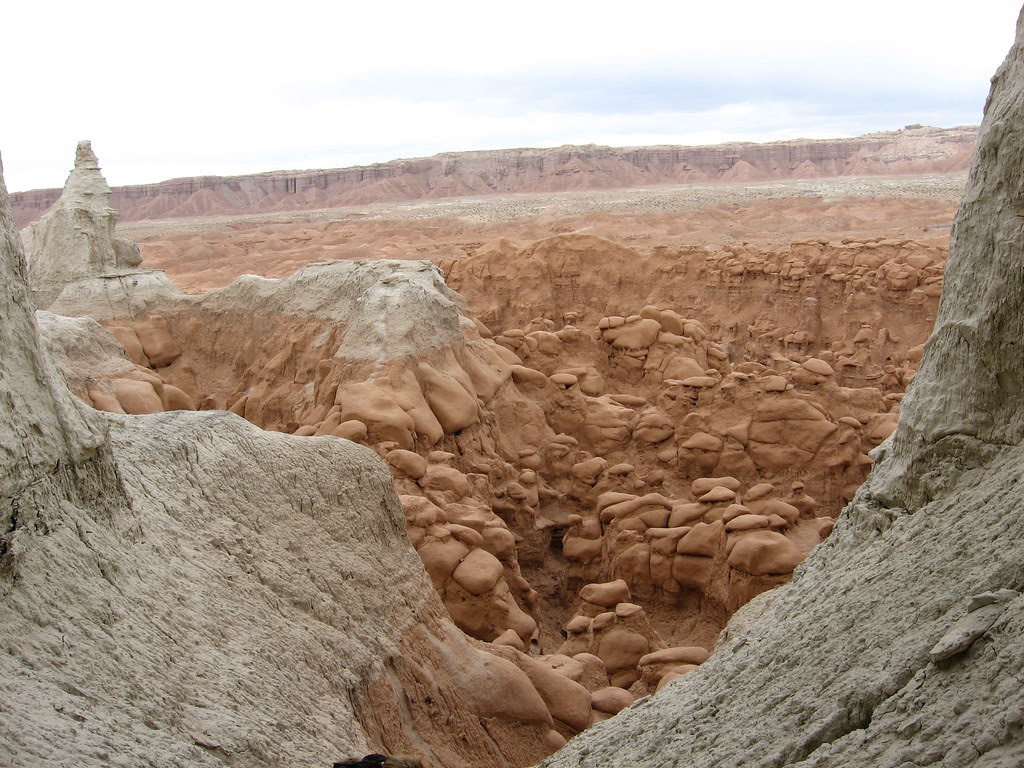 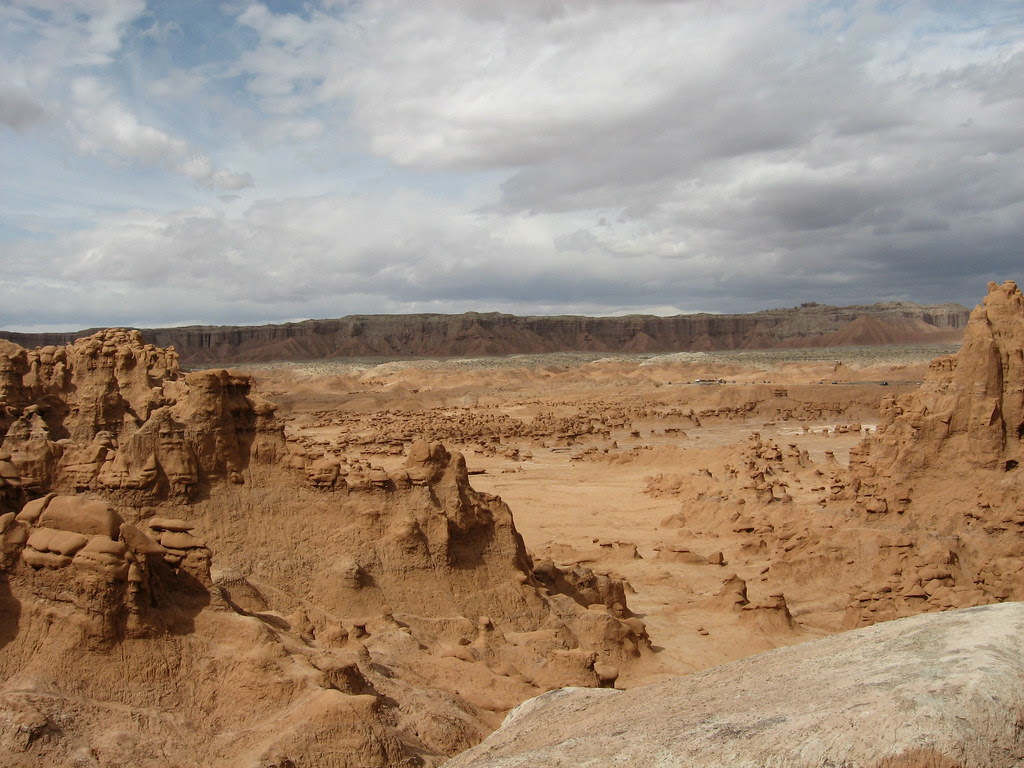 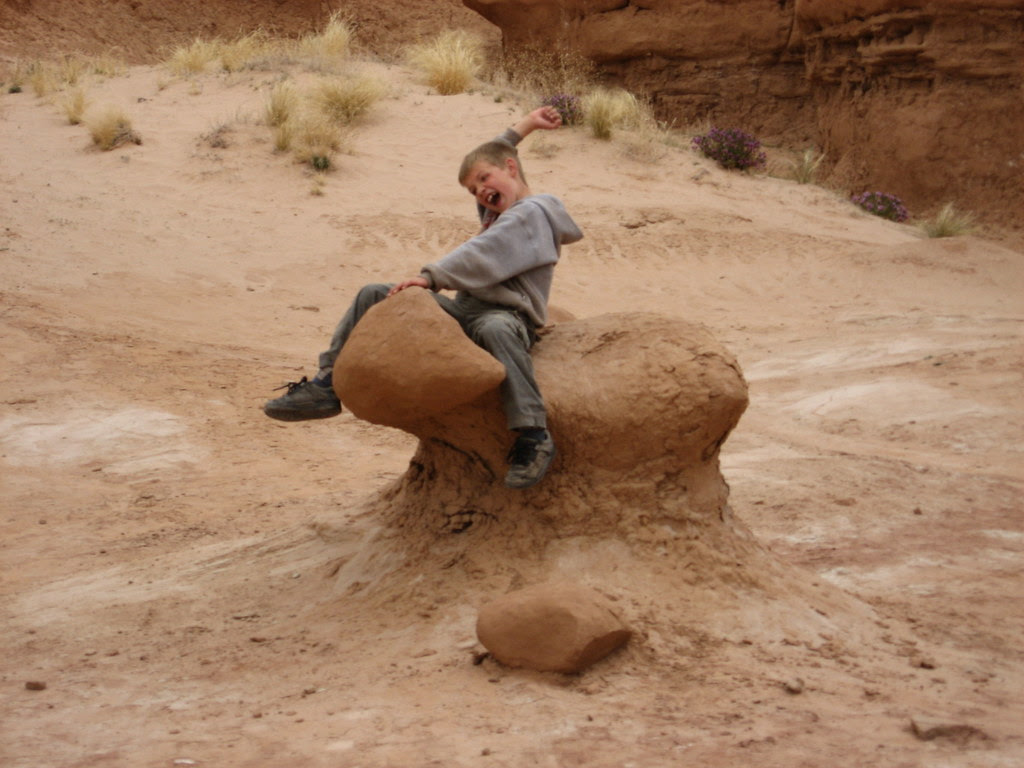 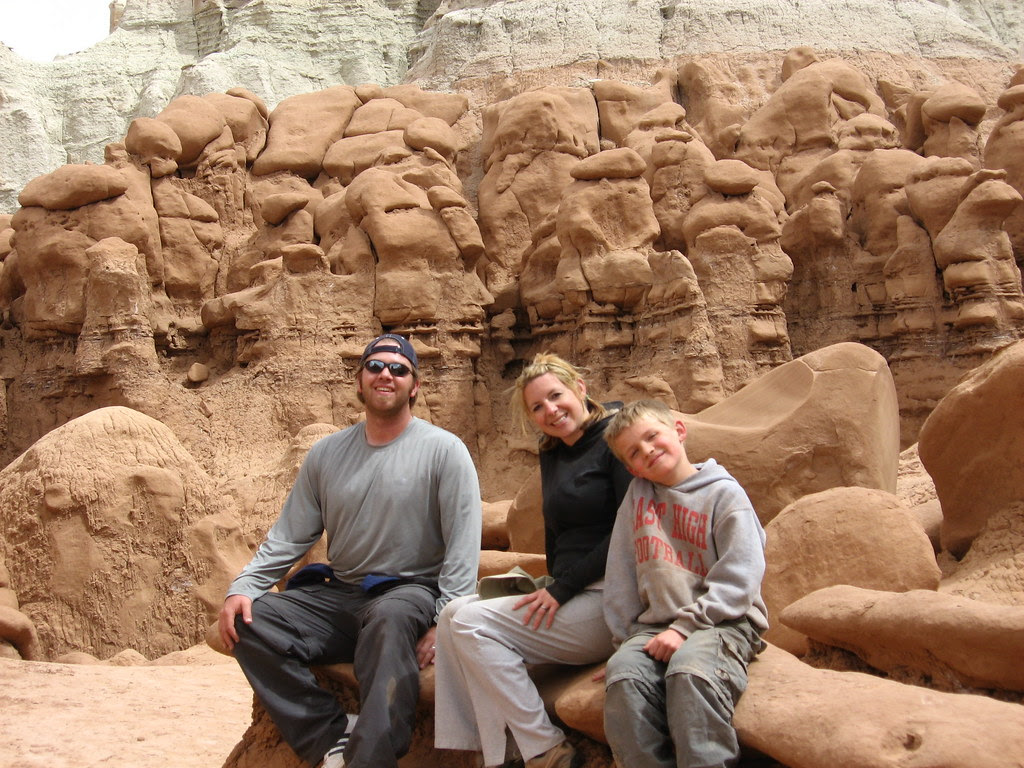 This is my favorite picture of Caiden. He's actually smiling and showing his teeth :-) 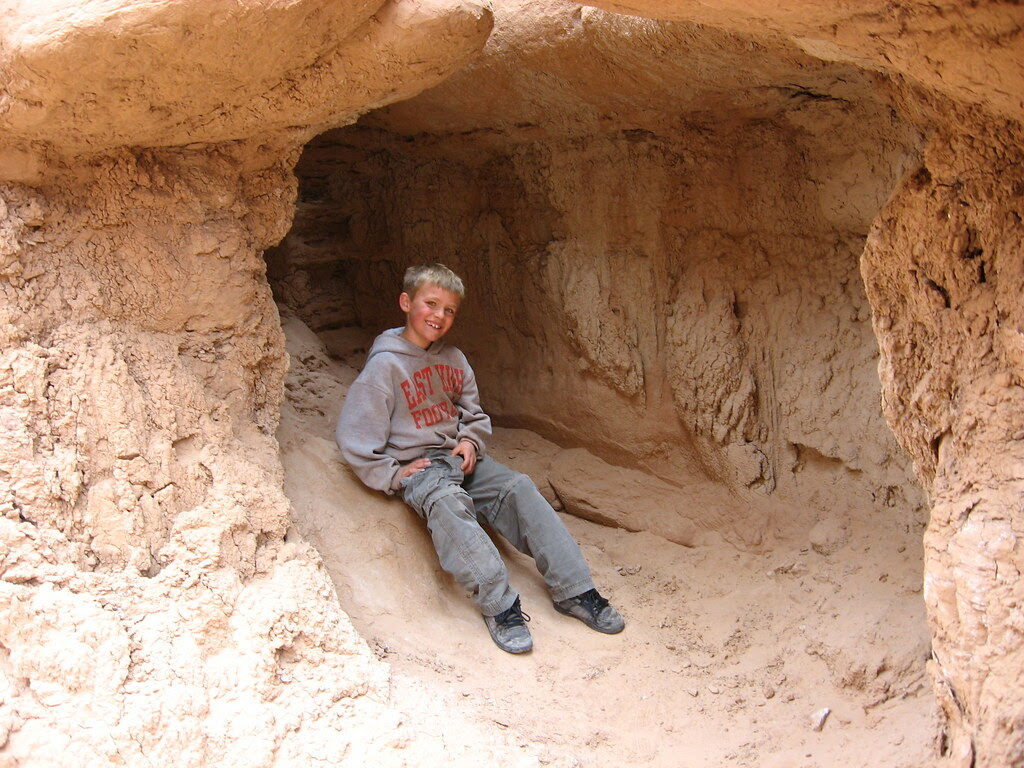 The REALLY deep and scary hole. I'm seriously surprised someone hasn't fallen in there. It just kind of shows up as you're hiking. 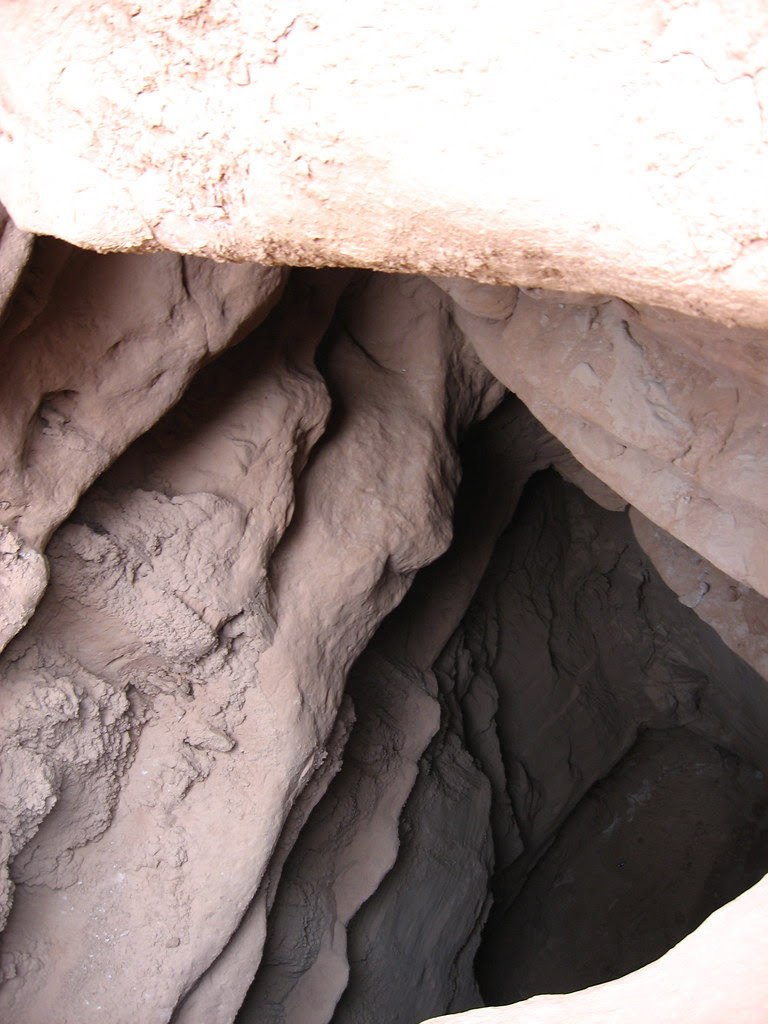 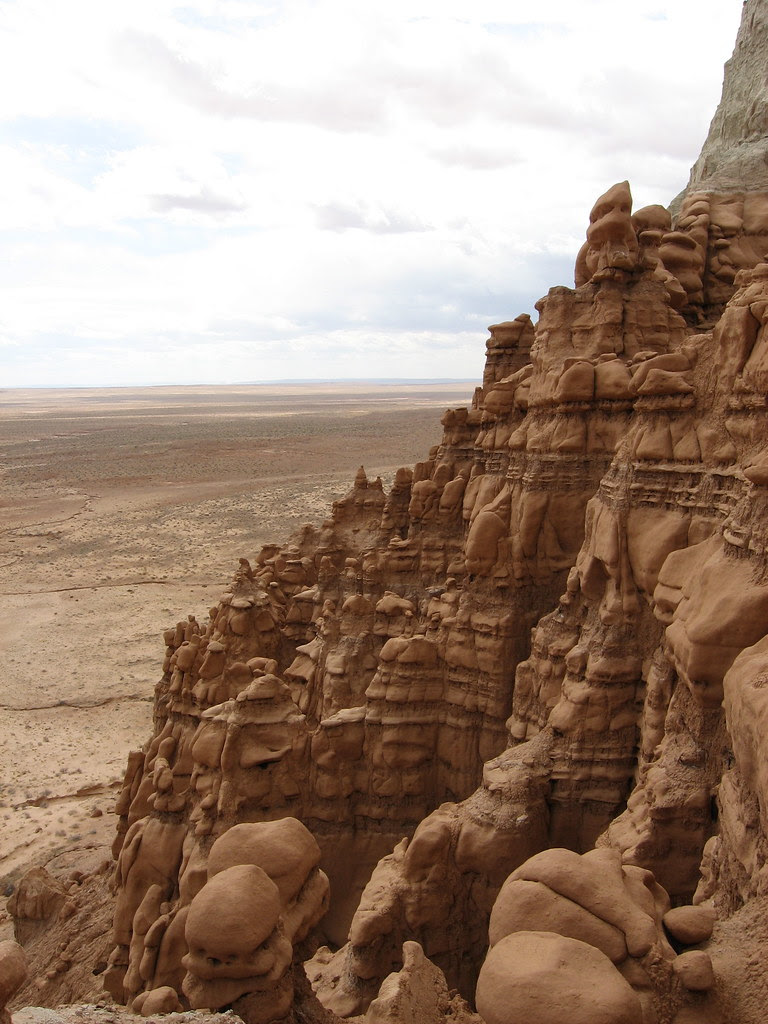 We had a great time in the area and I can't wait to go back and check out more of Moonshine and also, to go through Three Canyon, which runs parallel with Moonshine, just to the East.

We're taking a hiatus for the next month because of moving and Alene traveling for work for most of this month. We have a trip planned to Canyonlands, Needles district in early May, so that should be fun.

I've got to end with a few video clips of something else we did on the trip: Shoot guns. I've never owned a gun and until recently, I've REALLY wanted to get one for many reasons. First, for home protection, but second for outdoor protection. I shot Bill's Springfield XD9mm and Clint's XD .45 Cal. I also shot Clints new SKS rifle, which was fun. Alene also took a few shots with both the 9mm and the .45. I think I've almost got her convinced that it's OK to get one.

Clint Bump-firing his SKS (for the first time)

Posted by Unknown at 9:42 AM No comments: