Last year in May Alene, Bill, spent a couple of days down in Zion to get some canyoneering experience under our belts. Bill had done Fat Man's before and offered to take us through. It was a wonderful experience going through a more difficult, yet beginner-friendly canyon.

Being that I used my iphone to take pictures of our trip in 2013, and also being that I broke my iphone after exiting kehole canyon the next day (and never being able to recover the pictures), I'm combining this year's (2014) trip report pictures along with a video from 2013.

We all headed down from Northern Utah on Friday afternoon and met up at Zion Ponderosa for our basecamp. April and Bill got a much early start in the day so they took some time to hike over to the East Mesa viewpoint while we drove down. Alene and I arrived around midnight and we spent some time getting settled and making plans for the next day.

We slept in a bit longer than we should have and did not get started on the trail until around 8:20am. The hike in is beautiful, surrounded by many lush and green vegetation with the backdrop of the beautiful sandstone that makes the east side of zion so captivating. We followed a dry wash for about 30 minutes or so before coming to the steep and strenuous sandy hill to climb.

The ladies at the beginning of the trail

From the sandy hill we began our descent into the canyon, which had us go down and over about 3-4 minor "hills" before coming to the large upper portion of Fat Man's. We worked our way down the large slickrock and into the canyon and sat for a little break before venturing up a minute or two to the first rappel in the canyon.

One could bypass most of the technical sections in this canyon until you come to the last rappel, which is avoidable. By why miss the best parts? The technical sections come with all kinds of good beginner-friendly challenges. A nice 30' rappel, several down-climbs, an opportunity for some teamwork by using a meat-anchor, then partner assisting others down a few awkward drops. The upper canyon was mostly dry with a few pools here and there. The frogs were in full force.

Dropping into the upper canyon

Alene on the first rappel

The first arch room. That piece of webbing is used to swing around and get on that ledge Alene is standing on.

Exiting one of the technical sections

Bill and Alene on the last rappel

I wore knee/elbow pads for the first time and I LOVED the protection they provide. Such a difference. Look who's smiling and look who's frowning.

We stopped for some lunch before heading into the tall/narrow section and the last arch room. This is where more water appeared, much deeper than last year's jaunt through the canyon, which made for some fun.

Alene and April waiting to head into the second arch room

Looking back at the second arch room

The ladies in the second arch room

Alene and I at the grotto spring. It was so beautiful here and full of tiny frogs

Burst shot of Alene sliding into the last exit pool

We happened to run into some fellow outdoor message board aquaintances right as we came out of the canyon and spent some time talking with them before we went our separate ways. They had backpacked the entire east fork from Mt. Carmel, which was impressive. They were going to rest up before making the steep hike out of the canyon.

When you exit Fat Man's you get to see such a beautiful section of Parunuweap Canyon in the East Fork of the virgin river. It's like The Narrows, but without all of the people. We spent time swimming in deep holes and topping our water bottles off before heading down to the large rock fall and trying our luck at getting to Labrynth Falls, but we ran out of time because we had to get back to the Zion visitor center for our permits for the following day's canyon (Mystery).

Soaking up in the deep pools

Such a beautiful canyon

Another section of Parunuweap

The slog out was hot and somewhat eventful. About halfway out my quads (specifically the muscles above my knees on the inside) started to cramp up badly. Bill and April pushed on so they could get to the visitor center in time while Alene and I made a SLOW exit. Going downhill was fine on the legs, but any sort of uphill motion brought on major cramps. It was extremely frustrating. I made a note in my phone to make sure I am conscious of plenty of salty stuff while hiking in the heat (I should have known better).

Posted by Unknown at 8:56 PM No comments:

I had been intrigued by Mystery for quite a while, but I typically avoid doing a first decent of a canyon until I've gone down it with someone with more experience or someone that has done it before. 2014 was going to be the year for sure. April and Bill had scored permits for us and the date was set.

We spent the previous day doing Fat Mans and after a long slog out and major cramps in my (Tyler's) legs on the way out, I was sure to load up on extra salty stuff for Mystery, which ended up in obvious over-kill because this canyon is pretty much all down-hill.

Base camp was Zion ponderosa, so Bill and I left our shuttle vehicle at canyon junction the night before. We were up and at the East Mesa Trail head and on our way from there by 7:20am. I love the views of the park from these further-reaching places. The pine trees up on the higher elevations of the park make the air so fresh and the relative solitude from the busy canyon below is nice. By 8:10 we were at the Death Gully drop and we began our decent, making it to the first regular rappel by 9:00.

From there it was rappel after rappel, beautiful canyon walls, and a few down-climbs. After the first rappelling section we stopped for lunch until 11:30am, then headed on down for our last two (big) rappels at Mystery Springs and Mystery Falls, both of which I met with great anticipation and they both lived up to the hype.

Mystery Springs was such an amazing feeling. Just a large, beautiful place all to yourself. I didn't want to leave, but we had business to finish and that was just a bit down-canyon at Mystery Falls. As we approached the crowds below began to gather. Bill began to get frustrated as he prepared to toss our rope bags because people were standing right at our drop just staring up at us. He finally gave a violent wave at them to move and that seemed to do the trick. Alene, April, Bill, then myself being the last went down. It was slippery (as usually described), but just take your time, allow yourself to get a little wet in the water course, and enjoy the ride down. From there, we strolled a few corners to the Narrows exit by 1:20pm.

This is another obvious canyon I'd do again whenever presented with the chance and the availability. East Mesa TH to Narrows exit was 6 hours total.

About to drop into the Death Gully 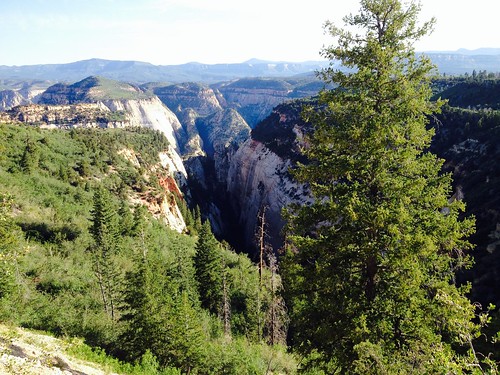 Going down the Death Gully 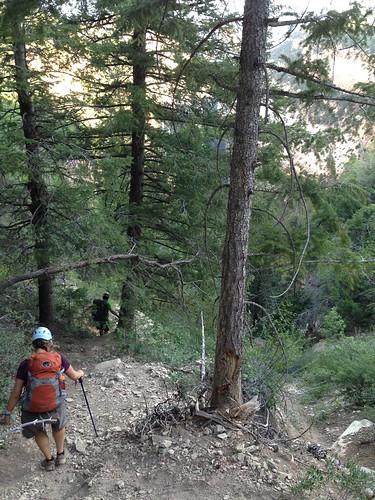 Alene and April on one of the first few rappels 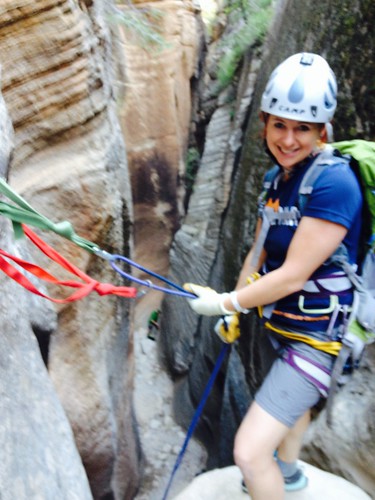 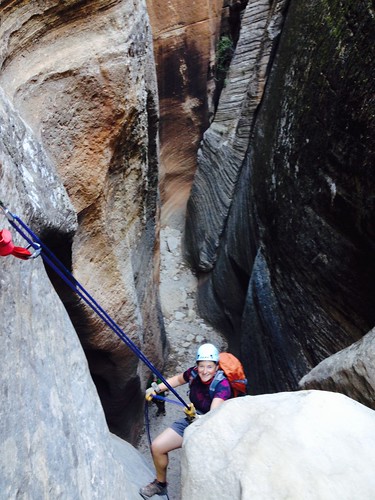 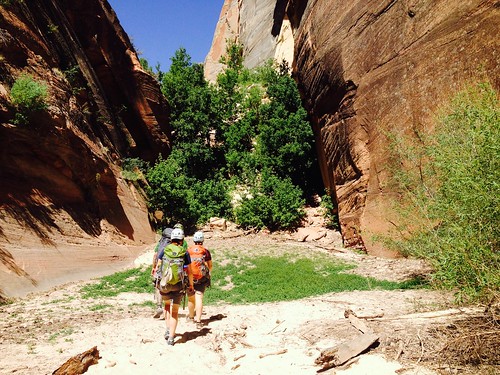 One bend away from Mystery Springs 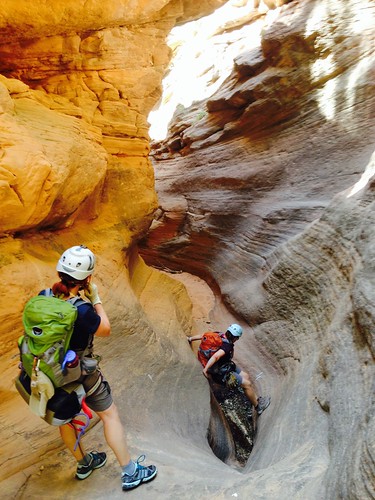 At Mystery Springs. My favorite place in the canyon 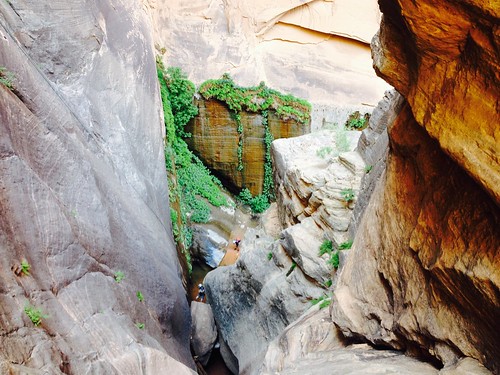 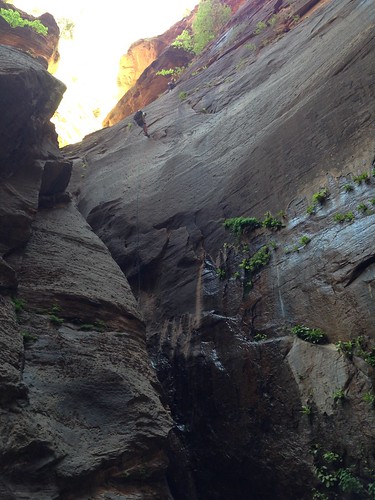 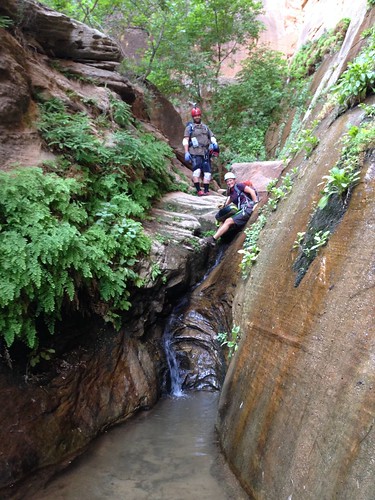 Alene on the last rappel at Mystery Falls 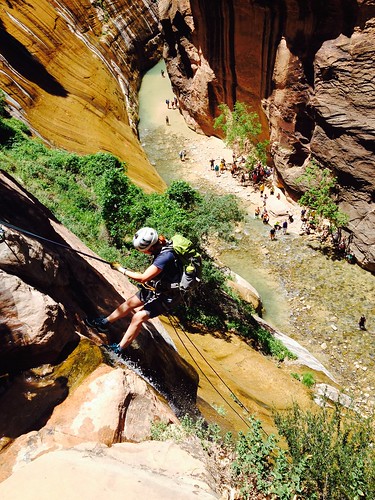 Tyler, coming down the last rappel at Mystery Falls 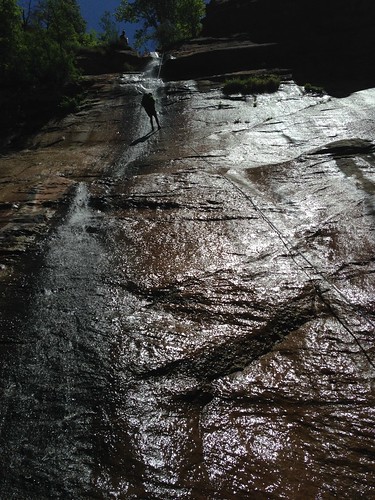 Video from our jaunt through the canyon

I'd always heard of this canyon, located in the "Robbers Roost" section of Utah and it was one of those "I'll do it someday" canyons. Bill called at the last minute and invited me because he (wisely) likes to make sure there are at least 3 people on a trip when technical canyoneering is involved (if one is hurt, one can go for help, the other can stay with the hurt person). This trip was a quick one-nigher.

We headed down on a Thursday evening, stopping at a couple of spots along the Lower San Rafael road to take a few pictures of the sunset, then settled at our campsite in the dark, which was just a spot at the trail head right along the road. The moon was so bright that night, I had to wear a sleeping mask just to get some decent shut eye.

We were up relatively early the next morning, packed our stuff away, then headed out on the trail by 8am. We entered the upper end of the shallow slot, but the good stuff picked up not long after and it just kept getting better.

The upper end was dry and something I loved was the white sand that was blown onto the sandstone shelves as you passed through. Eventually we got to the first major obstacle; normally a down-climb, the water below was brown and murky and it was hard to see if it was safe to make the slide into the water so we rigged a quick rap and went down. The water was COLD and the exit was deep mud, which was a preparation for some other nasty stuff later in the canyon.

We made our way through the rest of the canyon and eventually came to some of the most beautiful sculpted sandstone I've ever seen. Pictures/video will never do it justice. After the beautiful section was a long down climb, then a NASTY slog through mud/water so nasty it was all you could do to keep from puking (so thankful it was only knee deep). Beyond that was a rock-fall section you pass under, then the last long rappel. From there we took a quick snack break, then made our way down the canyon a bit, and a steep exit climb back out. We did not have a shuttle vehicle, so we just made the long slog back to Bill's truck and booked it home.

This is a canyon I would be happy to do this canyon again. Very much worth it. I would recommend setting a shuttle vehicle (or a mountain bike) to shorten the time.

Hiking toward the canyon

The upper (shallow) end of High Spur; this is where we entered

White sand on the canyon shelfs

The beginning of the nasty water. Hold your nose.

My shoes, coated with nasty-ness

Looking back at the last rappel

Petroglyphs on the exit out

Found this USGS marker on the way back to the truck

Video from our trip

Posted by Unknown at 9:27 PM No comments: