It was getting late in the season for camping with a 2-year-old so I decided to piggy-back on my husband's work trip hotel and take the kids to Grand Junction.  We left on a Saturday the last weekend of October, after the little league football game, and headed to Moab.  I got their with less time than anticipated to do much outside, but we drove over to the BMX bike park and watched the guys doing tricks and then played on the city slackline between the bridges that is set up.  We ate dinner at the Moab Diner which was so delicious and then went over to the hostel. 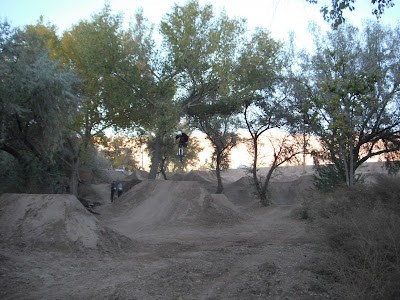 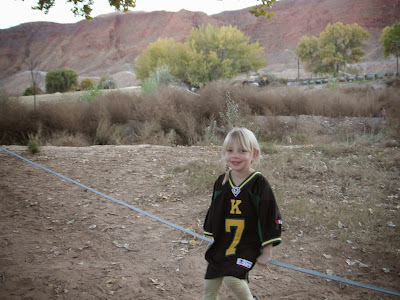 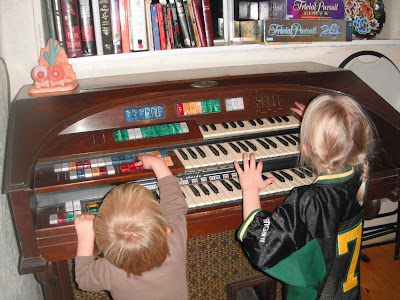 The kids slept great and in the morning we packed up to go hike Corona Arch.  When I'm alone with the kids I usually refer something familiar, but had success on this trip doing both a familiar hike and a new hike.

Corona was great, Bailey hiked with little complaint and Waylon was pretty good in the backpack except his obsession with trains stopped us up a bit when we crossed the tracks.  He wanted us to stay on the train tracks instead of leave them behind us.  Waylon was rewarded though when we were sitting under the arch, looking across the canyon at the tracks and suddenly heard the noise of an approaching train. 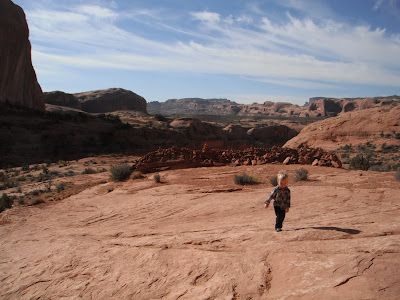 After that we played at a section of Millcreek in town and then drove the route along the Colorado River to go to Grand Junction.  It was a beautiful drive and parts of it were familiar from the half marathon I did a few years back.  We got to the hotel and played in the pool while we waited for Tyler to arrive. 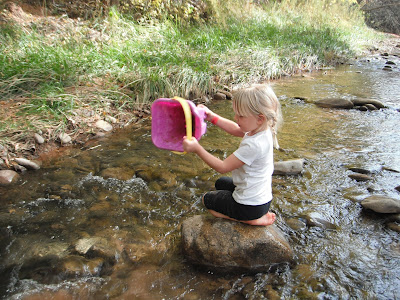 Next morning in Grand Junction I decided to head out to Big Dominguez canyon.  I did a little research on it and it sounded great, plus something I'd never done, I could hike as long or little as the kids would allow since I wanted them to have a good time hiking.  Lucky for Waylon, the first 1/2 mile or so is right along the train tracks and he was rewarded again with a track repair truck gliding right by us and waving.  I loved being alongside the Dolores river, it was beautiful!  We crossed the bridge at Bridgeport and continued on the trail to a great rocky spot along the Dolores.  Stopped here to play for a long time, it was a bit windy, but oh so beautiful. 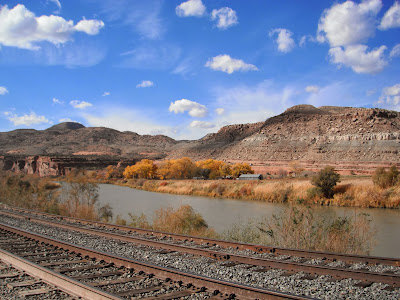 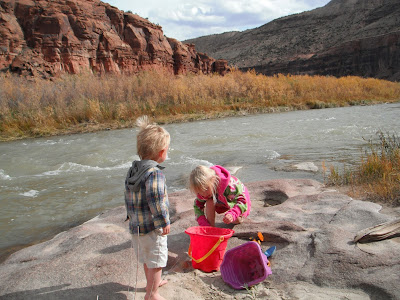 After that I did get a little pushy, I had been hoping to get to the first rock art panel up the Big Dominguez creek canyon and time was running out.  We took the fork in to Big Dominguez creek and there was a beautiful waterfall there.  I told the kids we'd play there on the way back, but it wasn't long before we turned around up the trail and I resigned myself to not seeing the petroglyphs.  I'll have to make it back there for sure but I'm glad the kids were able to have a lot of fun.  We played at the waterfall for quite a while because there was a small sandy area at the base. 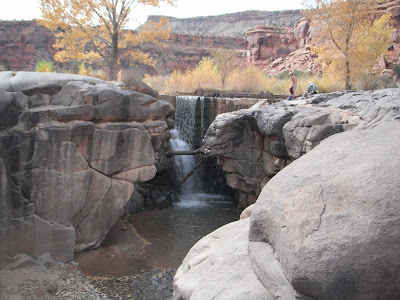 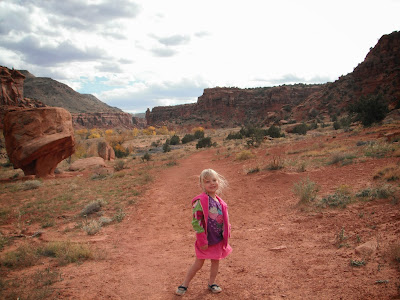 When the kids were cold from the water and ready to head back we went.  Waylon did get a bit fussy in the backpack only because he was tired, and he ended up falling asleep about 1/2 mile from the car. When I could see the parking area Tyler had just arrived after finishing some work appointments.  We loaded up the kids and went to dinner.

I drove home the next day and I can't wait to spend more time in Colorado.
Posted by Alene at 4:50 PM No comments: