Two weeks ago April and I and her sister-in-law Whitney hiked Mt. Timpanogos. This was my 3rd time doing the summit, but my first time doing it as a loop hike.

My first time hiking Timp was in college I went with a group to the summit, departing around 12:30 am so we could be on top to see the sunrise. We hiked via the Timpooneke trail, the side that starts in American Fork Canyon, known for being a little longer, but less steep than the other side. My second time I backpacked it with April and Bill via the Aspen Grove, or Provo Canyon, side. We spent the night at the lake and I did the summit in the morning.

This time we wanted to see both sides of the mountain in one trip. April had never hiked up Timpooneke so we decided to go up that way, since we all acknowledge that you pay more attention to scenery on the way up, and on the way down, just want to get down. However, this meant that the return trip down Aspen Grove was the steeper one, which was much harder on our knees. But it was cool to see both sides and I prefer loop trails in general if given the choice or possibility. Loop trails feel like more of a complete trip than reaching a destination and turning around the same way I just came.

I would agree that Timpooneke is easier as I hardly felt the need to rest at all. We made it to the summit in 4 hours even after a long rest at the saddle.

Here is a beautiful meadow we saw. 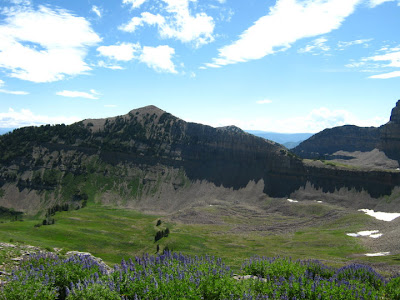 Here we are at the saddle, cold and windy. 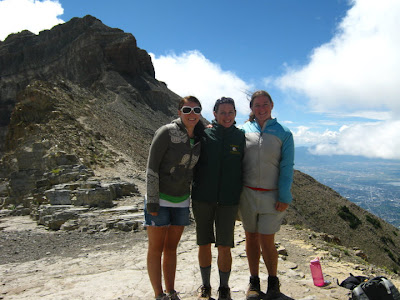 Here we are at the summit, and even though the clouds sort of blocked the view, I thought it was just perfectly beautiful and they added that whole mystical element to being on a mountain peak. 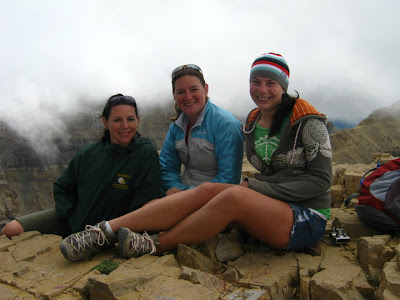 Looking out from the summit. 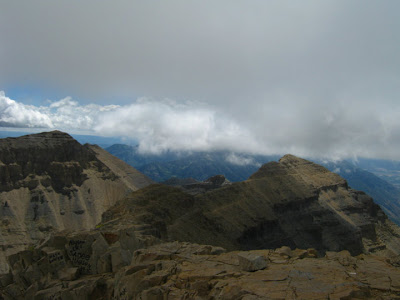 Looking down on the lake on the Aspen Grove side from the summit. 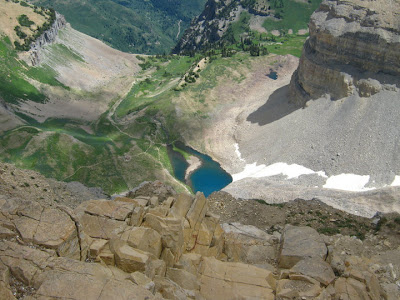 A mountain goat family that we followed down from the peak and then the whole herd at the lake. 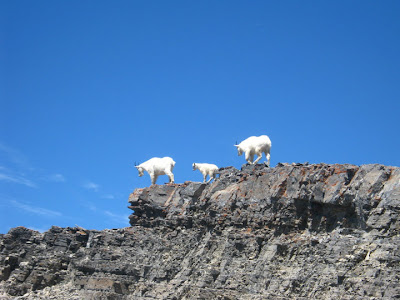 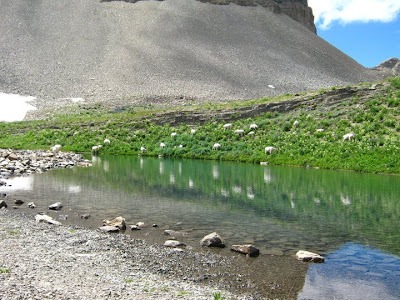 We hung out at the lake for a long time to eat and take pictures. I like how the Aspen Grove trail has more waterfalls, but it's true I didn't notice as much on my way down. I was glad to be done when we were, all in all it was 10 hours for the hike, which I consider pretty good time. My calves were sore for a few days afterwards, but it was awesome to do that hike. I strongly recommend doing it on a Sunday if you want to avoid crowds. It's a hard hike, but it is really popular.
Posted by Alene at 10:12 AM

Oh man. that is the best hike. you have some great pictures. It is so beautiful up there. I have only done it from the provo side and we left at night. So I did notice everything on the way down. it was like a whole different hike in the daylight. I would love to do it as a loop though. Like you said, loops are the best :)but not as good as those mountain goats. I'm so jealous you saw so many. lucky

Hey, I live in dallas and was bored at work today, looking for near city hikes to fly to and do on my days off. Basically all in all, im trying to find a good source describing the loop trail, i.e. how to navigate it, as a loop. because i know there are quite a few trails that cross, and what not. basically i wanna camp on the american fork canyon side. is there a way to go down the aspen grove, but still be able to make it back from where i started?

The link above gives directions for doing the hike from American Fork Canyon, otherwise known as the Timpanooke trail. We went up that way and down Aspen grove, we had left a car at Aspen grove though. The Aspen Grove parking lot is along the Alpine Scenic highway and is a popular route for sightseeing during non-winter months so it wouldn't be too hard to hitch a ride back around if you left your car at the Timpanooke campground.

Hope that helps, if you want more specs, send an email or if you need a hiking partner, we'd happily meet up. : )

Keep in mind that Mt. Timpanogos is covered in snow for a good portion of the year, you can usually only hike it in July or August.